Nigerian man, Anthony Uwaoma tells of how an acid attack by his ex-lover’s friend 24 years ago left him blind 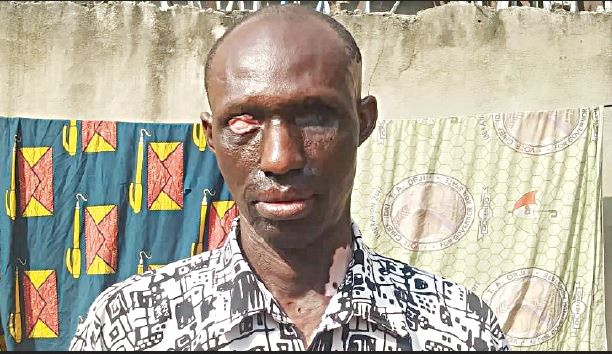 Anthony Uwaoma, a Nigerian man has told of how he became blind after he was bathed by acid many years ago.

How did you become blind?

I am from Ariam Usaka, Ikwuano, Abia State, and a multi-talented motorcycle mechanic who had the full complement of my sight before tragedy struck on August 22, 2004. Fate played a cruel trick on me. A devil’s messenger bathed me with acid and instantly, I went blind. Till date, I have remained completely blind, but I am undeterred from my dream of being productive, instead of being a liability to society. I completed my primary education in 1996 but could not go further due to lack of sponsorship. Rather than rust away, I took to skills acquisition by undergoing training in motorcycle repairs at Palmgrove, opposite Michael Okpara University of Agriculture, Umudike, where my apprenticeship lasted for three years and I graduated to become a qualified motorcycle mechanic. With a burning desire and dream to become a well-known expert in my trade, I opened my own shop in Aba in 2002 and as business was booming, I thought it fit for me to have a helpmate who will be my better half.

You said you were bathed with acid. How did that happen?

A beautiful damsel came my way and courtship began. Since I am the only male  child in my family and having nobody to help me, I decided to get married. I saw a girl I loved. I approached her and made my intentions known to her. I told her that I would like to marry her and that she would be the mother of my children. She agreed. I told her everything about myself and made her understand that I am the only male child in my family and I had no other helping hand. She told me that my poor background would not deter her from getting hooked to me. I later went to inform her parents and my mother of my desire and they gave their consent. As of the time we met, the girl was an apprentice hairdresser. I promised to open a salon for her immediately when she was through with her training. This, I fulfilled in February 2004, when she completed her apprenticeship. At this stage, with the burning anxiety and bliss in me, I was set to commence the marriage rites, but unknown to me, my heartthrob was double-dealing as she had another boyfriend who, actually, was her pick.

While the courtship lasted, I tried hard to find out from the girl if she was encumbered so that I would go my way as I would not want to get into any brawl with any man over a woman and the girl swore that I was her only lover in the world and I believed her. As our plan to get married was in top gear, one evening after work, I went on a commercial drive with my bike as I did on some days to augment my earnings for the day. I picked up a boy who asked me to take him to the Bakassi area in Aba. I agreed but I did not reckon that he was a devil. When we got close to Bakassi, he requested me to oblige him to ease himself. I stopped. When he was delaying, I urged him to hurry up, that it was getting dark and that I didn’t like working late into the night. Unknown to me, my passenger had hatched a perfect plot to maim me. And as he turned up, he bathed me with the acid he had hidden in that location and sped away. The place was lonely and dark. I raised the alarm, shouting for help and God rescued me with the help of people who came to my aid and rushed me to the General Hospital, Aba. The acid attack affected my two eyes and I lost my sight.  That was how I found myself in my present condition.

How did you know the person behind the acid attack?

I found out later, while on my sick bed, that my assailant was a friend to the girl I was planning to marry. The incident took place shortly after I had opened the salon for her. Immediately the incident happened, the girl disappeared into thin air, without a trace. The girl ran away and I am alone now. I have no lover, nobody beside me, even where I am living now in Aba. I’m alone there. The attack took place on Sunday, August 22, 2004, at about 8pm. From that day, I have been living in agony and penury. I was a man that was earning a living and fending for others, but by the cruel twist of fate, I have been turned into a beggar and have to depend on the goodwill of people to survive, the last thing I ever wished for in my life.

How have you been coping since then?

Life has been very difficult for me. Nobody came to my aid. I just survive by the mercy of God. Rather than rue endlessly over my plight, I resolved to acquire another skill if only that would lift me out of depending on people or resorting to begging. In fact, I cannot beg. I decided that no matter what my condition is, I will not resort to the market, roadside or street begging. Even if I decide to do that, I have no guide, anyway.

Have there been efforts to treat the condition?

Between 2004 and 2009, I was in and out of hospitals. From General Hospital, Aba, I was referred to Calabar General Hospital, Abak Hospital in Akwa Ibom, Kaduna National Eye Centre and Evangelical Church Winning All Hospital, Kano. It was at the Kaduna National Eye Centre that the doctors opened my eyelids which had been sealed. One Dr Charles from Tiv, who opened my eyelids, told me that my white eye (sclera) was okay but the cornea was the problem. He said the cornea must be changed before I could regain my sight. Efforts to restore my sight in local hospitals proved abortive, but doctors recommended that I should be flown abroad for proper treatment. But raising the fund for the trip has been a challenge for me.

Somebody had recommended that I should seek treatment in India, but the medical treatment alone would cost me a lot, excluding the cost of flight and other logistics as of 2004. The person assured me that if I got to India, I would regain my sight so far as the cause of the problem is acid. Even as I am here talking, I can see light very well but I cannot see any object. This gave me the determination to go for a new skill suitable to my new condition.

What skill did you learn?

When I learnt that Abia State Government was sponsoring disabled persons to go to Lagos for a skills acquisition programme, I went to the Ministry of Women Affairs, picked and filled the form in 2010. I was among the five disabled persons chosen to travel to Lagos to learn one form of skill or the other. The duration of the programme was from January to December. At the Nigerian Farm Craft, Ikeja, venue of the one-year training, I was trained in the production of various detergents, including soap, air freshener, bleach, insecticide, liquid soap and many other things. In addition to these, I can also weave bags with nylon rope or use nylon rope to design sandal tops or phone jackets. However, I have been enormously handicapped in setting up on my own business due to lack of funds, as the seed money which the government promised to give us after the training never came. I do not have the fund. I spent all my life savings on treating myself in hospital. As I speak with you, I do not even have the resources to feed myself. I estimate that with a capital of N100, 000, I could float a soap manufacturing factory.

Would you be ready to set up the business if the fund is provided for you?

I am more than prepared! Yes, I am very much ready! I will welcome any form of assistance; N2m would enable me to set up my own manufacturing concern. If I get about N2m, I can start off. I am saying this because as of now, I do not have original mould which is very costly. Those who build the mould have told me that the element of the mould alone is about N250, 000. A man who said he would build a customised mould for me said it would cost N900, 000 to build the master mould before I could take it to the plastic industry to produce manufacturing moulds for me. I will also require chemicals, plastic bowls, plastic drums and many others. I will also need a sealing machine for the packaging of the soaps. I embarked on a low-scale production, and only needed to convince people that I was ready to venture into manufacturing if I got the financial assistance.

I christened my company, A-Best, and at present, we produce well-packaged quality liquid wash, disinfectant, hair cream and perfumed body jelly and spray, among other range of products, using the money that people of goodwill gave me and that I saved up. If I see people willing to help me, I am going to make history because one thing is to go to school and another thing to be able to acquire the knowledge for which you went to school. I have the knowledge to embark on large-scale manufacturing of the items I have learnt how to make. I promise to make history in a very impressive way. I have already named my company A-Best. My products will bear this name. If I get sponsors, I promise to make history in a way that in future people will see A-Best company, even the government will send members of the National Youth Service Corps to serve in my company. I am ready to do that.

What is your appeal to the government and well-meaning individuals?

I am appealing to people of goodwill, philanthropists, corporate bodies, governments at all levels, whether they know me or not, to assist me. Even if anyone wishes to partner with me, I will welcome such a gesture because I am ready to do whatever I can do to make sure that my condition does not lead me to go outside there and start begging in the markets or streets. I want to be among Nigerians whose names will enter into the book of records in future. I promise to do that if I can get those who will sponsor me or partner with me. I am well read. Now that there is so much emphasis on medium and small-scale industries, the Abia State Ministry of Small and Medium Enterprises could do well to look in my direction as a multi-talented entrepreneur, to see how they can help me, as Abia’s ‘Dangote’ in waiting, to set up my dream soap factory and, thus, make me not only a useful citizen but a great employer of labour.