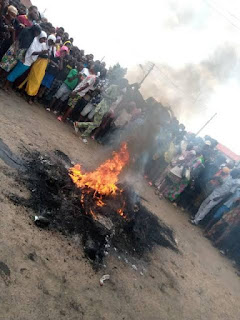 Angry mob on Monday, set ablaze a suspected kidnapper in Ibadan, Oyo State for allegedly attempting to abduct a child.

The incident happened at Mufu Lanihun area of Oke-Ado around 9:00 on Monday morning, December 28. Two other persons suspected to be his accomplice managed to escape with injuries.

According to an eyewitness, the suspects allegedly attempted to abduct a 4-year-old boy in the community. However, some residents in the area raised the alarm after suspecting their movement.

“It happened around 9:00 am today, the kidnappers were seen roaming the street with a doll at their back, before a resident who identified the child raised the alarm while they were trying to take away the boy." the witness said.

The suspects tried to flee the scene but only two made it out. The other one was caught around Awolowo Way and beaten to pulp before he was burnt to death by the irate mob.

A sum of N250,000 was said to have been recovered from the suspect before he was beaten and set ablaze.