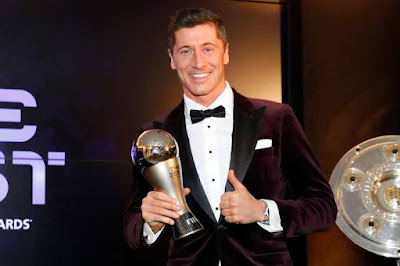 The Poland captain was named the FIFA Best Men’s Player for 2020 after his 55-goal season lifted Bayern Munich to a sweep of international and domestic trophies.

Voting was by a global jury of national team captains and coaches, plus selected journalists and fans.

Though FIFA hosted the virtual ceremony in Zurich, its president Gianni Infantino went to Munich to present the trophy in person.

Lewandowski joined Luka Modric, the Croatia and Real Madrid midfielder who won in 2018, as the only players in the past 13 years to deny both Messi and Ronaldo the victory.

Lewandowski is also the first men’s winner from a club outside Spain since Ronaldo won the 2008 award as a Manchester United player.

A Bayern player had not won since FIFA created a world player award in 1991.