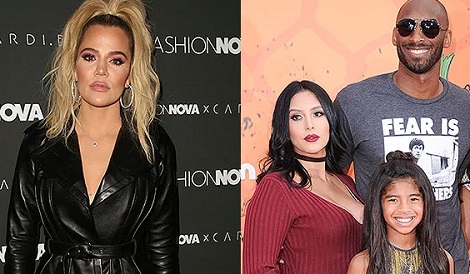 Khloe Kardashian made sure Vanessa Bryant was sweetly reminded of her late husband Kobe and daughter Gianna at Xmas, with their names on a custom gingerbread house.

The Kardashian-Jenners are all about customized gingerbread houses, with matriarch Kris Jenner having personalized ones made for all six of her kids every year.

Now one of them has passed along the the same tasty tidings, as Khloe Kardashian sent one of the sweet homes to Vanessa Bryant. It will be the 38-year-old’s first Christmas without husband Kobe Bryant and 13-year-old daughter Gianna, after they were killed in a Jan. 26, 2020 helicopter crash in Calabasas, CA.

Khloe, 36, wanted to make sure that the late Lakers legend and the couple’s late daughter were there with Vanessa and her three daughters Natalia, 17, Bianka Bella, 4, and one-year-old Capri, at least in sugary spirit.

“Look, it has all of our names on it,” Vanessa explained while showing how Kobe and Gigi’s names were written on the right side of the roof, while the rest of the family was on the left. “So it has Vanessa,” she said, as Bianka squealed, “you!” “Natalia,” V continued as BB excitedly chirped “my sister,” and then she joyfully said “me!” as Vanessa continued, pointing to her name and reading “Bianka.” When Vanessa pointed to Capri’s name and said it aloud, Bianka sweetly asked “who?” as V cheerfully questioned, “what do you mean?” Bianka then remembered “my sister!” She may have been a little confused as Capri is often called “Koko” as a nickname, as her middle name is “Kobe.”

The mom of three then showed off the other side of the roof where Kobe and Gigi’s names appeared with little angel’s wings drawn next to them. Vanessa pointed and read them out loud before moving the camera to show “The Bryant Family” written across the front of the gingerbread house in white icing. “What happened? Did you guys eat this?” Vanessa asked Bianka as she then did a full 360 degree tour of the gingerbread house.

“Khloe thank you so much! It’s beautiful!” Vanessa gushed.