Neymar scored twice at Old Trafford in his side’s 3-1 win, which puts them within touching distance of the last-16 of the Champions League. 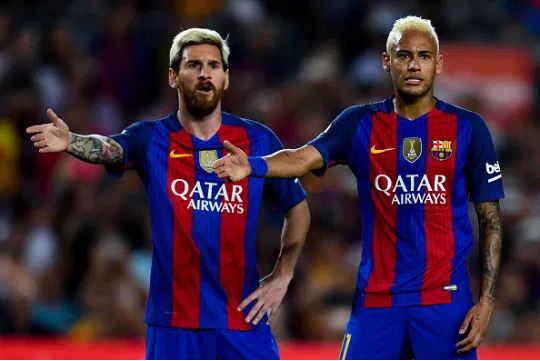 Neymar, the Paris Saint-Germain talisman, has dropped a Lionel Messi bombshell, declaring he wants to play with the Argentine.

Neymar said this after his side’s win against Manchester United insisting he plans on playing with the Barcelona superstar next season.

Neymar scored twice at Old Trafford in his side’s 3-1 win, which puts them within touching distance of the last-16 of the Champions League.

The Brazil international joined PSG from Barcelona in a £199.5million deal in 2017, making him the most expensive player of all-time.

However, he has threatened to leave on at least two occasions and he’s believed to be keen on a return to the Camp Nou.

Messi’s desire to leave the club last summer has complicated matters somewhat, opening up the possibility that the Argentine could actually join Neymar in the French capital rather than the other way around.

However, despite being delighted with his side’s win at the Theatre of Dreams, Neymar made it clear that he wants to play with the Argentine again next season.

‘What I want most is to play with [Messi] again, to be able to enjoy being on the pitch with him again,’ Neymar told Brazilian reporters after the game at Old Trafford.

‘He could play in my place. He won’t have any problems, I’m sure. I want to play with him again and I’m sure that, next season, we have to do it.’

With Barcelona in huge financial difficulty, it looks implausible that the Spanish giants could fund a move for Neymar.

The Catalans just about managed to hold onto Messi last summer, despite the Argentine’s transfer request.

Messi is out of contract at the end of the season and he’s free to speak to non-Spanish clubs from January 1st.