'How can we pay PSG?' - Lionel Messi doubtful of reunion with Neymar at Barcelona 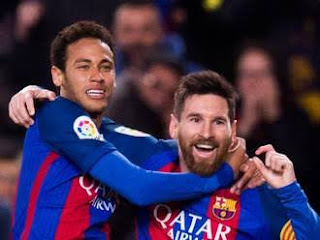 Barcelona legend and captain, Lionel Messi has raised doubts of his current club's ability to bring Neymar back to the club.

Neymar made a world-record €222 million move to Paris Saint-Germain in 2017 but has been consistently linked with a return to Camp Nou with Neymar last month asking for a reunion with Messi.

But Messi, who himself has been linked with a move to PSG, as his current deal expires in the summer, believes Barca's current financial difficulties will hamper Neymar's return to the Spanish giants.

Speaking to La Sexta, Messi said; "How do you pay Paris for the transfer?"

"It is not easy, it will be a difficult situation for the new president. He will have to be very intelligent, get everything in order and make many changes to make it go well.

"It will also be difficult to bring in players because we need money and there is no money. There are several important current players we need to fight again for everything and you have to pay them."

On Neymar's recent declaration that he wants to be Messi's team-mate again, he added: "He didn't say, 'Let's play,' he said, 'I'd like to play' … right?

"Yes, we talk from time to time. The three of us either with him or with Luis [Suarez] every day. We maintain the relationship."

Messi also commented on his relationship with Antoine Griezmann, after the French star's uncle hit out at the Argentine last month.

According to Messi, him and Griezmann get along just fine.

"The relationship is good, I already said it," Messi insisted. "I never had problems with him and I never did everything that was said, that I did not want his signing and all that, I think it was more than clarified.

"I have no problems, The relationship is good and sometimes we drink mate together in the dressing room and on trips. There is no kind of anything."