#EndSARS Panel: How Abba Kyari Forced Me To Transfer N41 Million From My Account - Victim Opens Up

The victim told the Lagos Judicial Panel on Saturday how SARS officers forced him to wire a sum of N41 million to one Edward Obinna and unlawfully collected other sums from him on different occasions. 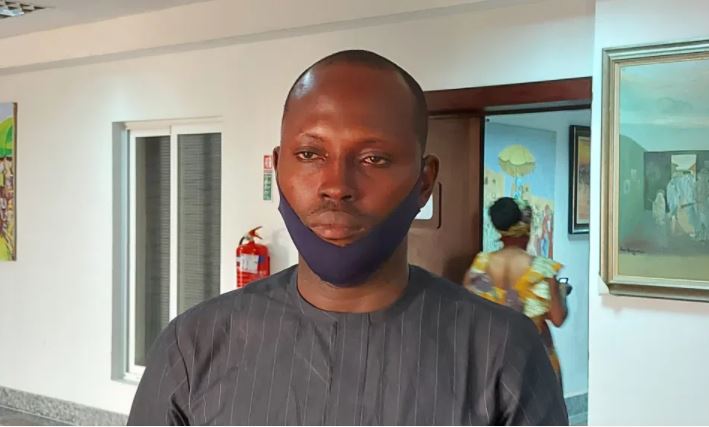 Mojeed narrated his ordeal in the hands of men of the Special Anti-Robbery Squad (SARS), who were supervised by Abba Kyari, the then Officer-in Charge, OC of the unit.

The victim told the Lagos Judicial Panel on Saturday how SARS officers forced him to wire a sum of N41 million to one Edward Obinna and unlawfully collected other sums from him on different occasions.

“I was in my apartment around 8-9 p.m. in my sitting room with my 2-year-old son and my mother in law watching the TV. My wife was in the kitchen cooking, she was five-month pregnant

“I heard a big bang on my door with a voice saying open this door or I bring down the door,” Mr Mojeed told the panel.

He said he thought it was armed robbers but summoned courage and opened the door, only to see four armed men in mufti, who pounced on him the moment he opened the door.

Confused about what the issue was, Mr Mojeed said the men beat him to the ground and his pregnant wife who was shouting and asking what the problem was, was slapped countless times.

“They chained my legs on the floor and handcuffed my both hands behind. In the process of doing that, one of the men pulled my wedding ring from my finger and collected Tissot wristwatch from my table. They also collected my wife’s wedding rings with several slaps.

“They went to my room, approached my cupboard, they picked the sum of N280, 000 and ransacked all aspects of my house,” he told the panel.

Mr Mojeed said the armed men, whose identities were unknown at the time, collected several documents from him.

He added that the men searched his car, took the sum of N50, 000 from the car and drove him to Inspectors put him inside their car, Sienna and drove off.

“They took me to Ikeja command, we got there around 11 p.m. The allegation as at then was that my car was a stolen vehicle,” he narrated.

He told the panel that he was tortured by the SARS officers till around 2 a.m. and was thereafter put in a cell.

The victim said the police came the next day to ask for the password to his phone which he gave and on seeing his alerts, they came back for him.

“They came back that I should give them the password to my personal account. They collected the atm, I gave them the wrong pin, they sent and came back, they could not cash out.

“Later that day, they pointed at Edward Obinna that I defrauded him of N97 million. Immediately I asked Mr Edward how much I defrauded him. He said he paid to my corporate account and I asked them to allow me get the bank statement to show proof.

“He later changed it that he paid to Yusuf Olatunji Balogun which is my cousin, the sum of N97million to procure some earth – moving equipment and he has been working with Mr Olatunji Balogun for the past two years and that Mr Balogun paid into my account and the money was with me, ” he told the panel.

The victim further narrated that the said Mr Balogun is his cousin and indeed pays him some money to buy properties on his behalf.

“Mr Yusuf pays me though, I buy properties for him and whenever he is in Nigeria, I tender his documents to him.

“I have never seen Mr Obinna or had any business dealings with him, he also admitted that he does not know me,” he said.

The victim said the torture by the police continued as he was handcuffed, hung and beaten with the flat side of a machete by the police.

“On October 22, under the supervision of Abba Kyari, I signed a check from my personal account, N150,000 twice, to a faceless Nurudeen Alabi.

“I was taken to Eco bank at Ikota, Ajah that same day that I had money there. There was an amount I fixed with Eco bank, they brought me to unfix it and transfer the money to them. The total amount was N15 million. The account manager suspected something was off and did not accept my application,” he told the panel.

They wanted me to transfer N41 million from my diamond corporate account to Edward Obinna. Due to the process of terminating the fee, they asked me to come back the following day, he added.

Mr Mojeed said he was returned to Ikeja, where the police started another round of torture saying he played a prank on them.

“At this time, they beat me that I could not see anymore, I was just hearing words,” he said with tears in his eyes.

“After I regained consciousness, they took me back to the cell. Around midnight, they brought me out with some inmates to unload three dead bodies in Hilux bus and threatened that if I didn’t comply, that is how they will waste me.

“On October 23, the following day, they took me back to Ajah, Diamond Bank. Before getting to the bank, they branched a boutique and bought me new clothes, jeans and cleaned me up and wore me the new clothes they bought for me.

“Mr Edward Obinna was behind us in his own car, following us. I was being led inside the bank, two officers went inside with me and sat like customers,” he said, now crying.

He further narrated that Mr Obinna accompanied him to where he picked a transfer form and wired N41 million to his account, adding that they waited at the bank until he received the alert.

Mr Mojeed further narrated that he was tortured and told to write a note and sign it that he transferred N41 million to Mr Obinna willingly.

The victim added that on October 24, 2014, he was taken to another Zenith bank branch, where he transferred N800, 000 to the same Mr Edward. He also paid another sum of N150, 000 through a cheque to Nurudeen Alabi under the supervision of Abba Kyari, the then OC, SARS.

“After achieving their objective, the police put a call through to my wife that she can terminate the presence of my lawyer that they are going to resolve the matter,” he said.

With the persistence of his lawyer, he was arraigned and released on bail on October 31, 2014, after spending 14 days in police custody.

The victim said he suffered poor sight and could not hear properly after the incident. He went to Ajeromi General Hospital, Ajegunle, where he was treated.

Posted by makarella at 9:48 PM