COVID-19 pandemic is 'not necessarily the big one,' a more deadly pandemic could sweep the globe - WHO warns 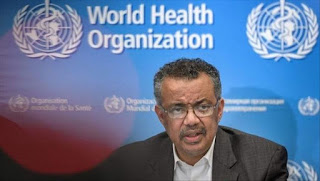 The World Health Organization has warned that the coronavirus pandemic is 'not necessarily the big one' and that a more deadly virus could yet sweep the globe.

Speaking on Tuesday, Dr. Mike Ryan, head of the WHO emergencies programme said the pandemic was a 'wake-up call'.

'This pandemic has been very severe… it has affected every corner of this planet. But this is not necessarily the big one,' he told a media briefing.

Dr. Ryan added: 'This [coronavirus] is a wake-up call. We are learning, now, how to do things better: science, logistics, training and governance, how to communicate better. But the planet is fragile.

'We live in an increasingly complex global society. These threats will continue. If there is one thing we need to take from this pandemic, with all of the tragedy and loss, is we need to get our act together. We need to honour those we've lost by getting better at what we do every day.'

Ryan also said that the virus was likely to remain part of our lives despite the introduction of vaccines.

'The likely scenario is the virus will become another endemic virus that will remain something of a threat, but a very low-level threat in the context of an effective global vaccination programme.'

'It remains to be seen how well the vaccines are taken up, how close we get to a coverage level that might allow us the opportunity to go for elimination.

'The existence of a vaccine, even at high efficacy, is no guarantee of eliminating or eradicating an infectious disease. That is a very high bar for us to be able to get over,' he said.

Ryan said that was why the vaccine distribution is designed to save lives by protecting the most vulnerable, The Guardian reported.

'And then we will deal with the moonshot of potentially being able to eliminate or eradicate this virus.'

Professor David Heymann, chair of the WHO's strategic and technical advisory group for infectious hazards, told the briefing earlier that it was the 'destiny' of the virus to become endemic.

'The world has hopes for herd immunity, that somehow transmission would be decreased if enough persons were immune' Heymann said at a media briefing, before explaining that the concept of herd immunity was misunderstood.

'It appears the destiny of SARS-CoV-2 [Covid-19] is to become endemic, as have four other human coronaviruses, and that it will continue to mutate as it reproduces in human cells, especially in areas of more intense admission.

'Fortunately, we have tools to save lives, and these in combination with good public health will permit us to learn to live with Covid-19.'

Being vaccinated against the virus did not mean an end to social distancing and other public health measures, chief scientist Dr Soumya Swaminathan told the briefing on Tuesday.

'I don't believe we have the evidence on any of the vaccines to be confident that it's going to prevent people from actually getting the infection and therefore being able to pass it on.

'So I think we need to assume that people who have been vaccinated also need to take the same precautions,' Swaminathan said, adding that the vaccine is intended to prevent symptomatic disease as well as severe cases of infection and deaths.

Meanwhile, here are other World's Deadliest Pandemics below.

The outbreak originated in rats and went on to wipe out 30-50 percent of medieval Europe's population. It took more than 200 years for the population to recover from the devastation.

The disease raged in Europe and was carried to the New World, killing an estimated 90 per cent of Native Americans. The first ever vaccine was created to eradicate smallpox.

Spanish Flu was the last major global pandemic before Covid-19 and killed in excess of 50million people between 1918 and 1919. It infected around 500million people - a third of the world's population at the time.

While the death toll of this plague, which was named for Roman Emperor Justinian I, is still under debate, it is believed to have been significant enough to have helped hasten the fall of the Roman Empire.

Beginning in Yunnan, China, this bubonic plague spread to every inhabited continent. It is believed to have come from two different sources, the more violent of which resulted in a strain that was largely confined to Asia.