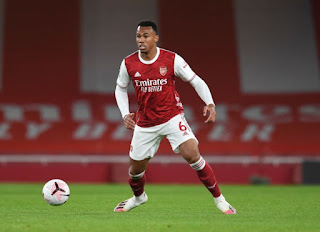 Arsenal defender, Gabriel  Magalhaes has tested positive for coronavirus and will miss matches with Brighton and West Brom.

The Gunners revealed on Boxing Day that the Brazilian footballer star was self-isolating after a close contact tested positive for the disease, missing the 3-1 home victory over Chelsea.

The 23-year-old, whose test has now returned positive, will now sit out Arsenal's meetings with Brighton on Tuesday and West Brom on Saturday.

An official club statement said: 'Gabriel has tested positive for Covid-19 and is isolating according to UK Government and Premier League protocols.

'We will continue to monitor and support Gabriel, and we are hoping he will be available again after our next two matches.'

Gabriel's diagnosis was announced after Manchester City's match with Everton got called off because of an outbreak among City's squad and playing staff.