Ex-Banker Sentenced to 17 Years In Prison for Stealing N93m

A former banker has been convicted by a court in Kano for engaging in fraud and criminal breach of trust. 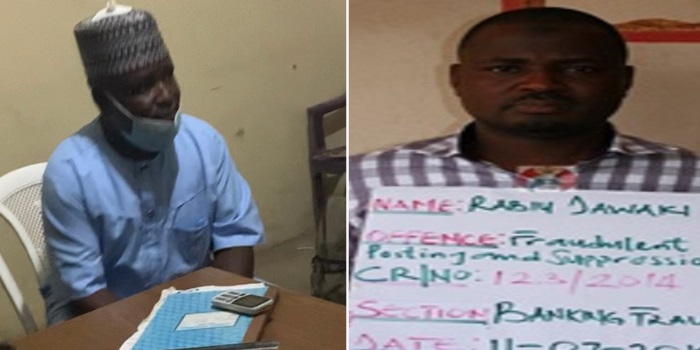 Dawaki
A court has jailed a former banker for engaging in fraud and stealing millions from a bank.
Thi comes after the Kano Zonal Office of the Economic and Financial Crimes Commission, EFCC on Monday, November 23, 2020 secured the conviction of Rabiu Alhasan Dawaki before Justice Dije Abdu Aboki of the Kano State High Court on charges of conspiracy and criminal breach of trust.
Dawaki was arraigned alongside two others Abdullahi Umar Rano and Samuel Obende who are now deceased on a 28 count charge bordering on Conspiracy and Criminal Breach of Trust.
The three defendants, all former employees of an old generation bank, were responsible for receiving, processing and distributing of money to all their bank’s cash centres across Kano, Katsina and Jigawa states.
They however betrayed the trust of their employers and conspired among themselves to defraud the bank by diverting the funds to their own use.
The convict alongside his co-defendants were said to have altered figures to show that they made cash deliveries to designated branches whereas the monies were never delivered.
Upon arraignment on February 26, 2015, Dawaki and his co-defendants pleaded not guilty to the charges, thereby setting the stage for full trial.
During the course of the trial, Dawaki’s co-defendants died and their names were subsequently removed from the charge.
The prosecution called a total of seven witnesses to prove the case against the convict, while the defendant called six witnesses, including himself.
In her judgment today, Justice Aboki found the defendant guilty on seven counts of the charge and convicted him accordingly.
She however acquitted him on twenty one counts.
She convicted him on count 1 which borders on Conspiracy count 2, 11, 22, 24, 25 and 26 all of which borders on Criminal Breach of Trust.
On count 1, 11, 22, 24, 25 and 26 the convict was sentenced to 2 years imprisonment and fine of N200,000 (Two Hundred Thousand Naira) only on each.
On count 2 however, he was sentenced to 5 years imprisonment and fine of N200,000 (Two Hundred Thousand Naira) only.
The court added that sentence on count 2 and 11 are to run consecutively while counts 1, 22, 24, 25, 26 are to run concurrently.
Justice Aboki ordered that the convict restitute all the sums of money involved in the counts he was convicted of, amounting to N93,232,500 (Ninety Three Million, Two Hundred and Thirty Two Thousand, Five Hundred Naira) only.
Posted by makarella at 11:05 AM