Ajay accused Akeredolu of being desperate to remove him from office before the expiration of their tenure in office, which elapses in February 2021. 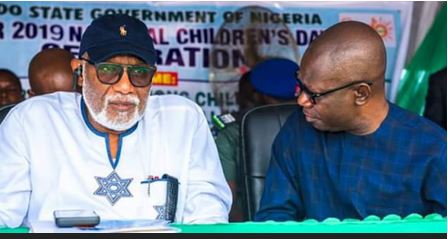 Agboola Ajayi, the deputy governor of Ondo State, has made some serious allegations against Governor Rotimi Akeredolu.

Ajay accused Akeredolu of being desperate to remove him from office before the expiration of their tenure in office, which elapses in February 2021.

Ajayi said Akeredolu was considering all means to have him removed from office after an initial plan of forging his signature on a resignation letter prepared in his name.

In a statement by his Media Adviser, Mr Allen Sowore, the deputy governor linked the sack of the Attorney-General of Ondo State to part of plans by Akeredolu to kick him out of office before his tenure expires.

The statement reads, "Mr Governor has clandestinely orchestrated the announcement of the removal of the Deputy Speaker of the state’s House of Assembly, Ogundeji Iroju, without any due process.

"All these are premeditated efforts to circumvent the institutions of state and usurp the powers of both the legislative and judiciary arms of government to pave way for the illegal removal of the deputy governor.

"The general public should be wary of these latest antics and desperation of the governor to remove his deputy through a macabre plan to forge signatures of members of the state’s House of Assembly on the prepared impeachment notice."

The feud between Ajayi and Akeredolu started when the deputy governor began to contest for the position of the governor, which he eventually lost.

The state lawmakers had made moves to impeach the deputy governor by writing to the Chief Judge of the state, Justice Oluwatoyin Akeredolu, to have him removed.

The judge rejected the request due to the inability of the Assembly members to follow the constitution to form the required number needed to impeach Ajayi.