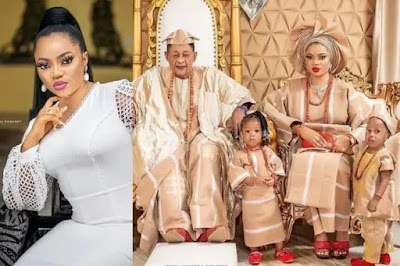 Queen Anu, one of the wives of the Alaafin of Oyo Oba Lamidi Adeyemi, has confirmed that she has walked out of her marriage in order to be “free” from “bondage.”

Anu, however, noted that she is being threatened and constantly harassed by the monarch for making the decision.

In a message released via her Instagram account on Wednesday, Anu stated that she can no longer keep quiet because the monarch had attempted to kidnap her.

The mother of two further warned that if anything happened to her and her children, the public should hold the monarch responsible.

“This is an outcry to protect my life. That I left the palace should not warrant a threat to my life. I can never deny my children the right to their father, however, it is only motherly to have them with me.

“I am appalled that my family is being harassed because my location is unknown to the king. The attempt to also have me kidnapped failed, and I can no longer keep my silence.