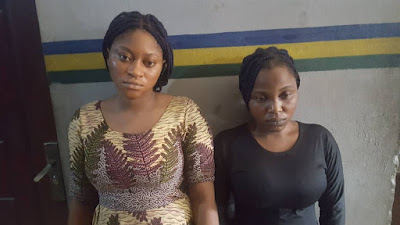 A 19-year-old girl, Jemila Ibrahim, has been arrested in Lagos for allegedly setting ablaze the home and girlfriend of her ex-lover at the Festac area of the state, leading to the death of the victim.

According to a statement by Olumuyiwa Adejobi, the Lagos police spokesperson, the incident happened on November 18 at Monkey village, Festac. The suspect reportedly perpetrated the act with the help of her friend, who was also nabbed.

“The Lagos State Police has arrested one Jemila Ibrahim,f, 19 year old, and her friend, Fatima Mohammed, f, 21 years, of Monkey Village, Festac Area, Lagos, for setting ablaze the house of one Mohammed Yusuf of Monkey Village, Lagos State, and his girlfriend, Rabi on 18th November, 2020 at 5.30pm,” the statement partly reads.

According to the statement, Mohammed Yusuf, the ex-lover to Jemila, got a hint and rushed to the house where he met his house on flame with his new girlfriend still in the house.

The police said Mr Yusuf managed to rescue Rabi, his new lover, from the inferno and took her to the hospital, but she died on November 21.

“Mohammed had alleged his former lover, Jemila Ibrahim, of infidelity before they broke up; he later met and fell in love with his new lover, Rabi, that was caught up in the inferno.

“The duo of Jemila Ibrahim and her friend, Fatimo Mohammed of Monkey Village, who accompanied Jemila to commit the heinous crime, have been arrested by the police operatives attached to Satellite Division of the command,” the statement reads.

The Commissioner of Police, Lagos State, Hakeem Odumosu, who condemned the crime, directed that the matter be transferred to the State CID, Panti, for investigation.