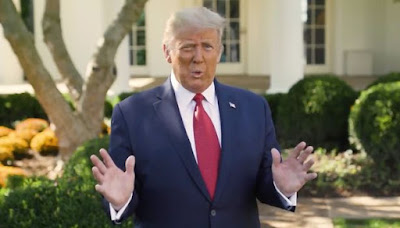 Donald Trump has said getting the coronavirus was a "blessing from God" and claims to have already been 'cured' in a matter of days.

In a rambling five-minute propaganda video posted to Twitter, the US President said he had taken a number of therapeutic medicines during his time at the Walter Reed National Military Medical Center which left him "feeling great".

He was released just three days after being admitted on Friday and said after taking pharmaceutical giant Regeneron's experimental antibody cocktail REGN-COV2 - at his own suggestion - he felt better within 24 hours.

"I went in and I wasn't feeling so hot and within a very short period of time they gave me Regeneron.

"It's called Regeneron. And other things too, but I think this was the key. But they gave me Regeneron. And it was like unbelievable. I felt good immediately."

Again pinpointing RGN-COV2, he continued: "I view it different, for me it's a cure. I walked in, I didn't feel good, a short 24 hours later I was feeling great - I wanted to get out of the hospital.

"And that's what I want for everybody. I want everybody to be given the same treatment as your president because I feel great, I feel perfect."

The President, who was not wearing a mask in the clip despite having not yet tested negative for Covid-19, said: "I think this was the blessing from God that I caught it.

"This was a blessing in disguise. I caught it, I heard about this drug, I said let me take it, it was my suggestion...and it was incredible the way it worked."

Trump also said ensuring Americans who are admitted to hospital with coronavirus get effective therapeutics is "more important to me than the vaccine".

Posted by makarella at 5:41 PM