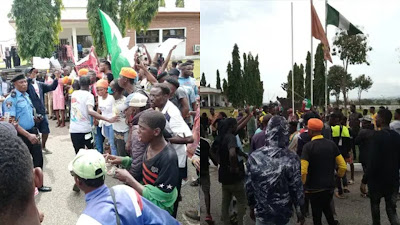 Protesters in Osogbo on Wednesday stormed the State House of Assembly, lowered the All Progressives Congress flag and replaced with a T-Shirt with the inscription “#EndSARS forever” boldly written on it.The protesters had earlier converged at Old-Garage and marched to Ola-Iya junction, where they disrupt traffic for about one hour before heading to the Assembly complex.

At the Assembly, the protesters refused an attempt by the Chief Whip, Tunde Olatunji, to addressed them insisting on seeing the speaker, Timothy Owoeye, but were told the speaker was not around, hence, they removed the APC flag and replaced with a shirt with the #EndSars inscription.

The angry protesters left the Assembly and headed to the State Secretariat where they blocked it entrance and created gridlock on the Gbongan-Osogbo road leading to the state capital.

Motorists from Gbongan, Ode-Omu, Ede and even those coming from Ibadan had difficult times accessing the state, as they had to wait for hours in the gridlock.

One of the protesters, Tomisin Adewale, said the protests would continue in the state if the state government officials feel they were too big to identify with us.