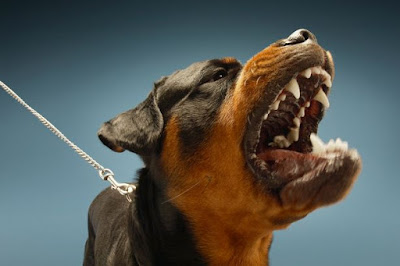 A mum who 'popped to the loo' returned to find her Rottweiler had snatched her newborn in its jaws and was trying to bury it.

The one-day-old baby died after the dog mauled it at the family home in Hamilton, New Zealand, in a horrifying attack.

Police said the infant, who had been born the night before, suffered critical injuries in the attack at about 7pm on Sunday, according to reports.

Paramedics rushed the infant to Waikato Hospital, but a police spokesperson confirmed to reporters the baby boy died overnight.

A neighbour, named only as Karen, told Stuff the mum had given birth the night before the attack.

She said one of the family's two dogs had attacked the tiny newborn at their Enderley home, in New Zealand's North Island.

Karen had been at the house earlier in the day, she said.

The family's new two-year-old Rottweiler escaped the property, and she had caught and returned it to their fenced-off section.

When she returned a second time, she met the newborn - describing the mum as extremely happy with her new baby.

Karen said she walking down the street to see the family again later that day when she saw a commotion.

To her shock, Karen found the mum sitting on the grass outside the home, weeping and cradling her injured and crying baby.

She told Stuff: “He was just so little. He was all dirty and had bits of blood on him.

“She told me which dog did it – they have two. It was the rottweiler.

Karen said she understood the dog had tried to bury the baby boy after attacking it.

“All she did was pop to the toilet and it happened just like that. The whole thing is horrible, every time I close my eyes I just see him.”

Both of the dogs were taken to the pound, Karen said.

She said she almost felt guilty for taking the dog home following its escape after finding out what it had done.

Police told media officers had referred the baby's death to the coroner.

Local authorities said a decision on the dog's future had not yet been made.

"Further decisions regarding the animal will be informed by the ongoing police investigation."