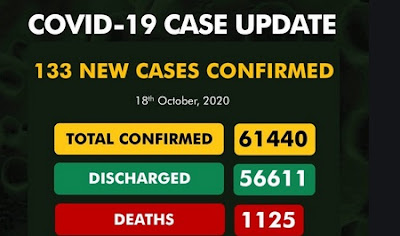 Nigeria recorded two new deaths from the coronavirus on Sunday, according to official figures.

A total of 1,125 deaths related to the virus have now been recorded thus far in Africa’s most populous country.

Nigeria has continued to record daily cases below 300 for more than two months with 133 infections reported Sunday, according to the country’s infectious disease outfit, NCDC.

This brings the total number of infections in the country to 61,440.

The NCDC in its daily update of the infection on its verified Twitter handle @NCDCgov stated that out of the over 61,000 infections so far, 56,611 persons have recovered and have been discharged..

There are still about 3,700 active cases in the country.

Posted by makarella at 8:33 AM