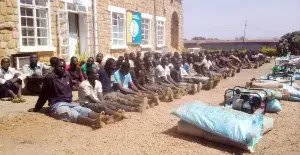 The Commander of the task force, Maj.-Gen. Chukwuemeka Okonkwo, presented the suspects to newsmen on Sunday in Jos.

Okonkwo said that the suspects defied the 24-hour curfew imposed by the State Government to perpetrate the criminal act.

He said some of the suspects were arrested while looting properties at the Plateau Agricultural and Development Agency (PADP), located at Dogon Dutse of Jos North Local Government Area of the state.

Others, he said, were arrested while trying to vandalise and loot private shops at West of Mines area of the locality.

The commander said that the arrest was aimed at curbing all forms of criminality in the state, adding that it would also serve as deterrent to others.

“We arrested these suspects while vandalising and looting private businesses and properties in Jos.

“These are hoodlums, not EndSARS protesters. So,they are purely criminals

“We will not tolerate any form of criminality and this exercise will also serve as deterrent to others,”he said.

He warned that the task force would decisively deal with anybody caught tampering with public properties, adding that the suspects would be prosecuted.

“We shall not spare anyone caught unlawfully taking government property. Such persons are criminals and will not go scot free

“These suspects will be handed over to the appropriate authority for prosecution,” Okonkwo said.

He said that the task force would make more arrests, adding that the outfit’s personnel were out to ensure that such criminal elements were apprehended.

News Agency of Nigeria (NAN) reports that the suspects comprised 110 males and 13 females.

Some of the items looted by by the suspects include pumping machines, bags of fertilisers, herbicides and pesticides.