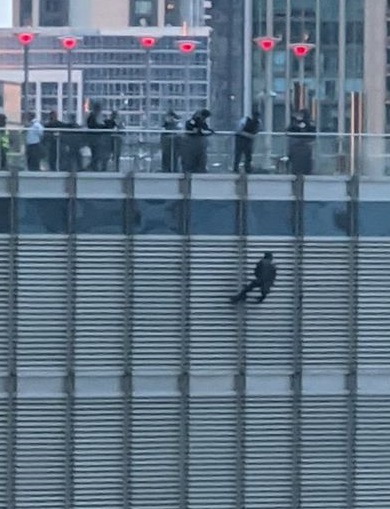 A man is dangling from Chicago's Trump International Hotel and Tower by a rope.

He is said to be threatening suicide if he is not able to speak to US President Donald Trump and the media, according to local press.

The man, described as being of Asian ethnicity, is reported to be armed with a knife and prepared to cut through the rope if his demands are not met.

He is dangling from the 16th floor balcony of the 98-storey building, with a witness saying he has been there since around 6pm - with Chicago six hours behind the UK.

A SWAT team and Marine Unit are understood to be at the scene, with police on the balcony above the man.

Photos and video footage show the man hanging in an abseiling position in line with the word 'Trump' in the building name.

An eyewitness, aged 29, told the Mirror Online: "A man is currently hanging off the side of the tower.

"There are police on top of the tower and in boats on the river. Not sure how he got up there but has been there over an hour.

"There are some reports saying he is threatening suicide if he doesn’t speak to POTUS."

He added: "There was a large crowd both above and below the bridge, but people kind of faded away as the sunset."

Posted by makarella at 8:35 AM