Flames and thick smoke are also emanating from the prison premises, fueling fear among residents, most of whom have locked shops and scampered for safety. 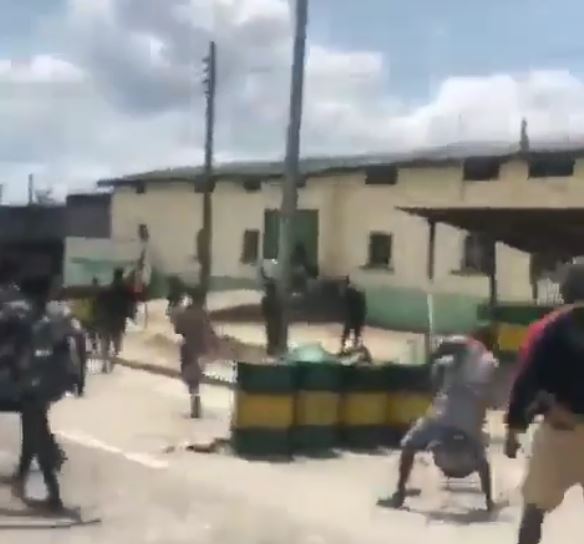 As the on-going jailbreak in the country continues, some inmates at the Okere Prison in Warri South council area of Delta State have escaped despite shootings by security operatives.

Flames and thick smoke are also emanating from the premises, fuelling fear among residents, most of whom have locked shops and scampered for safety.

The Nation online had reported a scare across the Warri metropolis following rampaging youths reportedly bearing cutlasses and tyres.

The cause of the fire is not clear, but confirmed reports claim that the thick smoke coming out of the premises of the correctional centre is as a result of the burning of tyres.

It was learnt that the shootings were to scare hoodlums planning the jail break, away.

Residents of Okere Road where the prison is located are panicking over the possible replication of the incidents in Edo, Lagos and other states.

Sporadic shootings followed afterwards, forcing the hoodlums to retreat, even as a voice is heard saying “oya, na house o”.

Another video clip shows at least seven persons come out of the prison to heavy cheering of the cutlass-wielding youths.

Yet another video depicts dozens of youths suspected to have initially escaped, made to seat on the ground in front of the prison gate by heavily armed security operatives.

Confirming the escape, the State Police Public Relations Officer, DSP Onome Onovwakpoyeya, said the prisoners had been protesting, prior to the jail break.

“He said some of them were able to escape, I don’t know the number for now. He said they pushed the gate from inside, I don’t know how because on our part, we fortified the place from the outside.”

Posted by makarella at 6:58 PM