Fani-Kayode goes after Tinubu over him still being a Jagaban 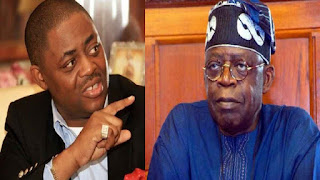 Femi Fani-Kayode has attacked the National leader of the All Progressives Congress, APC, Asiwaju Bola Tinubu for saying that he did not travel out and that he is ‘still the Asiwaju of Lagos and Jagaban.’

A reporter had asked Tinubu, who paid a condolence visit on Governor Babajide Sanwo-Olu in Marina on Saturday: “Sir, we were told that you were in London, you were in Paris, when did you return?”

Tinubu replied: “I didn’t go no where, I am a Lagosian, I still hold the title of Asiwaju of Lagos and I am still the JAGABAN.”

This is the comment that infuriated Fani-Kayode that made him fire saying: “You are heartless, you are cold-blooded, you are wicked, you lack empathy for the suffering and you are a sociopath. Your spell may work on others but it does not work on me.

Fani-Kayode added: “Your spell cannot silence, bind or blind me like it has done to others. I see you for what you are and your vain and boastful words here have confirmed it. To think I once loved and admired you gives me sleepless nights and goose pimples. How could I have been so blind?

“When Baba Fasoranti’s daughter was murdered by Fulani herdsmen you made mockery of it, went to his house and asked “where are the cows?”

“This was insensitive, callous and painful and all the more so because when the murderers of this much-loved and referred lady were eventually apprehended and arrested they were indeed Fulani herdsmen even though their cows were not arrested with them.”

Fani-Kayode further said: “The latest episode in your catalogue of atrocities is that children that were protesting peacefully and asking for #EndSARS and an end to police brutality have been slaughtered at Lekki Toll Gate in Lagos under your watch as National Leader of the APC.

“Sadly instead of exhibiting any remorse or displaying any regret for this abominable atrocity, with a sheepish smile and a sneering and jocular tone, you had the sheer nerve and effrontery to say nothing other than that you are “still the Asiwaju of Lagos and the Jagaban.”