#EndSARS: My Husband Was Killed While Coming From His Shop By A Policeman Guarding A VIP — Ekiti Widow

The woman tells how her husband died from a bullet fired by a riot policeman who was attempting to clear the road for the convoy of a very important person. 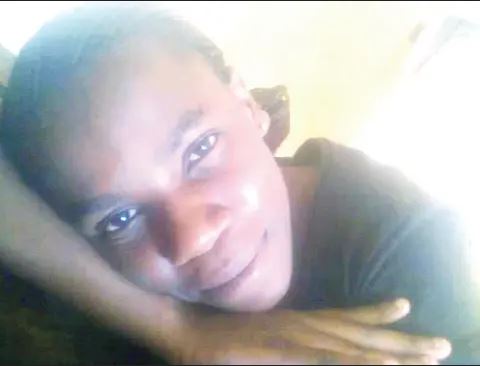 In this interview with The PUNCH, the widow of a Nigerian man who was killed during the #EndSARS protests speaks about the sad incident.

Twenty-nine-year-old  Odunayo Abolarinwa, widow of 33 years old Mr Olatunde Abolarinwa, tells ABIODUN NEJO that her husband died from a bullet fired by a riot policeman who was attempting to clear the road for the convoy of a very important person during the #EndSARS protest in Oye Ekiti

Who was Mr Olatunde Abolarinwa?

My husband, Mr Olatunde Andrew Abolarinwa, popularly known as London tailor, was 33 years old. He lived and worked as a tailor in Oye Ekiti.

What can you say about him?

He was a gentle and meek person. He was easy going and hated having issues with others. If anybody attempted to pick up a quarrel with him, my husband would want such a person to smile at him before leaving the scene. Everybody knew and loved him. He was the breadwinner of the family with his tailoring business. He fended for the extended family and mine as well.

Why was he not at work on that day?

He went to work on that fateful day, Tuesday October 20. The incident happened after work. We were together at the shop. After closing for the day, he asked us to go home. Myself, the three children and his younger one who is an apprentice staying with us. He said the apprentice should take us home on his motorbike while he would trek home. He was to get a cloth for sewing at a location, that was where he went to. It was while he wanted to cross to the other side of the road that a bullet hit him in the chest.

Does that mean he wasn’t among the protesters?

No. He was not that kind of person.

Who was responsible for the gunshot?

Eye witnesses said it was a mobile policeman in the convoy of a very important person.

Why did he shoot him?

I was not there. But those around there said the mobile policeman shot to free the roads of the #EndSARS protesters so that the convoy of the VIP could pass. I was already at home. The time was between 6pm and 7pm. Then I could hear gunshots from the town because our house is far inside, somehow far from the nerve centre. Although my husband asked me to prepare ‘moimoi’, but because we left the shop late, I decided to cook beans. It was in the process of sorting the beans that I started to hear gunshots. It occurred to me that my husband was trekking home and that I should call him on the phone to ascertain his safety. I didn’t even have call credit at that point, but I borrowed airtime with which I called. But his phone was switched off. I then called those who I thought could be nearby, but the person I called said he was not where my husband was at that moment and that he had gone to collect a cloth. I called another person, but the person said they were together. I felt I heard his voice in the background, so I calmed down not knowing that a tragedy had befallen us.

Later, when I called the person, he did not pick the phone and eventually switched it off. It was then fear set in that something might have happened in town because it was sporadic gunshots. I was afraid, I rushed to a neighbour’s house, but he had been informed on  the phone of the calamity. He didn’t know how to tell me. On seeing me, he withdrew, I asked him ‘daddy, why did you act that way?’ But he replied ‘nothing’ and started walking away. But when his wife queried where he was going, the man, not knowing I was following, replied the wife that bullet had hit London Tailor in town. I shouted. I then told the man that efforts should be made to take him to hospital for urgent treatment not knowing that he was hit in the chest and had died instantly.

His death was still concealed from me until the next day. They deceived me that he was rushed to Federal Teaching Hospital, Ido Ekiti where he was responding to treatment, but he had died and his body taken to the morgue.

What was your reaction on finding out that he was dead?

Has he been buried?

His remains were buried on Thursday.

Did you report the matter to the police?

It’s the brothers that I was calling to check up on him at the hospital. I did not know he was dead that day. I cannot say whether it was reported. But we learnt soldiers were aware that day and attempted to go after the mobile policemen. When we were taking my husband’s body for burial in his hometown, Omu in Oye Council area, when somebody told the soldiers at a roadblock on the road that I was the wife of the person who was shot dead by the MOPOL on Tuesday, the soldiers felt sorry and they confirmed that their effort to apprehend the mobile policemen was not fruitful because the cops had gone before soldiers got to the scene. Again, another thing is that policemen were no longer available since the protests intensified. Even the Araromi area where my husband was hit by the bullet was not far from police station.

Can you recall your last moment together and whether there was any premonition of his death?

Ah no. he never had any premonition of death. That day, he had N200 on him, somebody transferred N800 to my account, he said I should withdraw N500 from it, he added the N200 to it to make N700 and asked me to prepare ‘moimoi’, saying by tomorrow, God will provide what we would eat. It was late before I left the shop and I decided that I would cook beans instead. I was still preparing to cook the beans when I felt disturbed by the gunshots.

Who was he to his children?

Tunde was a loving father. At night, he was the one waking the children to urinate, he was the one administering drugs to them when need be, he bathed for the children, he would take them to school on his motorcycle. He was the one doing everything for his children. Even on the ill-fated day, he was the one that bathed for the children. He helped me to arrange my mum’s load, harvested plaintain, which he put in the sack because I helped my mum to buy goods. He arranged the goods and carried it to the park where a Lagos vehicle was waiting for the load. We exchanged banters as he was going to the park with the load. I said ‘thank you my love’, he smiled and said he knew I was extremely happy that morning. He said “thank you ‘ife mi’ (my love) as you appreciate what I am doing for you”. I later went to shop to meet him. He sewed clothes that day for both male and female customers. Before closing for the day, he said he would fuel the generator to work on the clothes of new couple on Wednesday.

How will his death affect the family?

It is tragedy even for the whole of Oye Ekiti where he worked and his Omu hometown. Everybody is bothered, concerned and worried considering who he was to all. London Tailor, as he was fondly called, was popular even as far as Ado Ekiti, the state capital. The incident touched everybody. We are missing him and we will sorely miss him.

What were his future plans?

He had plans to fully complete our house. Although we have moved in, we have not done the ceiling, the house has not been plastered, no windows yet, he said we should be working on it gradually. He was also planning to stock my shop. He had built the shop already, it remains to stock it. He was about going to raise fund for me to buy fridge in the shop following which it would be stocked as part of solution to hunger in the family and to ensure we could support each other financially. These were part of our plans and to fend for our three children. He had the plan to give the children the best form of education. For instance, the eldest was always telling the father that he wanted to go abroad and would take dad and mum along. And my husband always assured him that he would sponsor him even beyond that point by God’s grace. I am now left to ask myself what will become of the plans!

How do you intend to continue with the plans?

I am at sea. I do not know at all because I have no job. I do not know how we are going to feed and how to cloth the children. I am confused on how to fend for the three children whose responsibility fate has suddenly put on me. While I think of how to face life, I do not want my husband to die in vain. I seek support for the family to enable the innocent children who are two years old, five years old and eight years old have good and meaningful lives.