#EndSARS: Mothers Hit The Streets Of Lagos To Protest Against SARS Brutality (Video)

To join the call, elderly women in Lagos took to the streets to protest against police brutality. 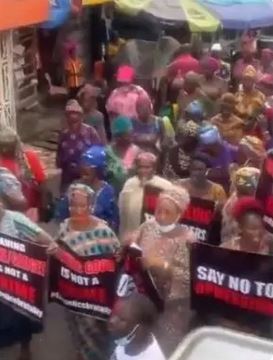 Some mothers in Lagos State have also joined the ongoing protest against the brutality metted on Nigerians by officers of the Special Anti-Robbery Squad, SARS

Many Nigerians are currently protesting against the police unit.

The Special Anti-Robbery Squad is a Nigerian Police Force unit under the Force Criminal Investigation and Intelligence Department headed by the Deputy Inspector General of Police Anthony Ogbizi.

For days now, Nigerians have been protesting in number against continued police brutality, and activities of SARS officers.

The citizens want the police unit to be totally abolished, and not reformed.

To join the call, elderly women in Lagos took to the streets to protest against police brutality.