A video has surfaced showing men of the Nigerian police reportedly opening fire at protesters. 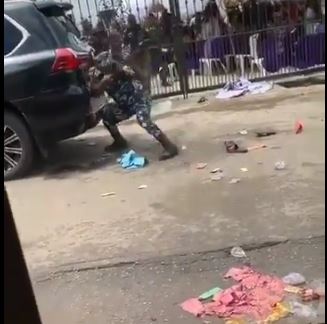 Police allegedly firing at protesters
A graphic video has caught errant police officers opening fire at peaceful protesters yesterday.
It was gathered that the tragic incident happened at the Olowu of Owu palace.
The video was shared by a Twitter user, @Baybbie who wrote:
This is not an Action Movie.
This is the video of @PoliceNG  openly firing at Peaceful protesters at Olowu of Owu palace yesterday.
They ordered this criminals with guns to fire at the Youth for no reason #EndSARS
Watch video below:
Posted by makarella at 12:42 PM