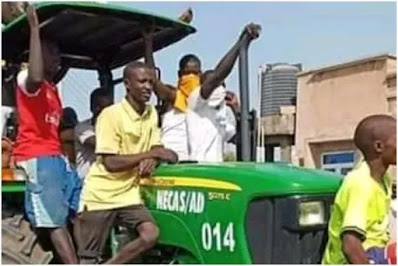 Alhaji Sadiq Umar-Daware, the Chairman, North East Commodity Association (NECAS) has said  hoodlums who took advantage of the #EndSARS protests, have carted away 110 new tractors and implements from the association’s warehouse in Yola.

He said the hoodlums broke into another warehouse filled with fertilisers and carted away several bags and farm implements arranged for distribution to farmers to commence the planting season.

“Files for various programmes were destroyed and they made away with various documents,’’ he said.

According to Umar-Daware, NECAS has many tractors because it was incorporated to provide among other services, tractor leasing and mechanisation service for farmers.

“What they took away include tonnes of rice, beans, maize, sorghum and millets, and computers, tables, chairs, office equipment, water dispenser and cash,’’ he said.