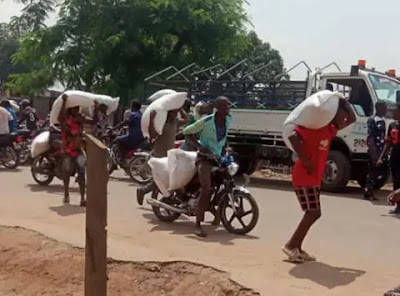 It was a chaotic scene at the Idu Industrial Layout in the nation’s capital, Abuja on Sunday as irate youths invaded the area in an attempt to break into the chain of warehouses in the layout.

Buoyed by the successes of the initial looters, many residents of the area were said to have trooped into the industrial layout to get what they erroneously consider as a piece of the “national cake”.

Although most of the warehouses in the industrial layout are privately owned, it was gathered that one of the facilities was initially used to hold COVID-19 palliatives.

However, the warehouses that were looted on Sunday belong to companies owned by private individuals as the one owned by the government was said to be largely empty of stocks.

While the police fired gunshots and tear gas canisters to disperse the crowd, many of them stood their grounds and bolted with several items including mattresses, bags of rice, cereals and textiles materials.

Many of those who took part in the looting went with motorcycles, Rickshaw (tricycles) and a few with vehicles. They were seen conveying their loot through the Idu-Jiwa route.

As of the time of filing this report, many offices in the area had shut down and asked their staff to go home.

There were concerns that the crowd could go after several other private warehouses in the area which plays host to many factories, with warehouses for storage.

At the Dakibiyu village in Jabi district, there were concerns that some hoodlums may have gained access into a warehouse belonging to the National Emergency Management Agency NEMA.