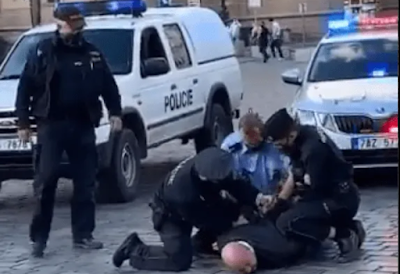 Police in the Czech Republic reportedly arrested a man who attempted to disrupt #EndSARS protesters on Sunday.

It was learned that some white thugs moved to the scene of the protest in Prague with the intent to destroy and cause mayhem.

Police, however, reacted swiftly, and one of the thugs was arrested.

The protests against police brutality continue in different parts of the world both online and offline.

The Federal Government of Nigeria has scrapped the controversial police unit that was accused of recurring brutality, but Nigerians insist there is a lot more to be done.

According to many, #EndSARS is a slogan and not just for the end of the Special Anti-Robbery Squad but a call to end all forms of systems designed to oppress Nigerians.