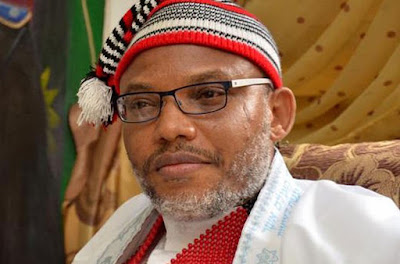 The leader of the proscribed Indigenous People of Biafra (IPOB), Nnamdi Kanu, has commended #EndSARS protesters.

Naija News reports that protesting youths in Nigeria are agitating for the end to Police brutalization and extra judicial killings of Nigerians. The protesters have been on the streets for six days now, protesting the brutalities, humiliation, and extortion of Nigerians, especially the youths.

The protesters demanded an end to the Special Anti-Robbery Squad (SARS), a police unit under the Force Criminal Investigation and Intelligence Department headed by the Deputy Inspector General of Police Anthony Ogbizi, using a hashtag: #EndSARS.

However, since the announcement that SARS has been scrapped, the protesters have refused to leave the streets, which Sagay says might force the Federal Government to take drastic measures against the protesting youths.

Reacting in a statement issued by Emma Powerful, IPOB Media and Publicity Secretary, Kanu commended youths for waking from their slumber to demand justice in the ongoing #ENDSARS protest across the country.

“We are happy that at last the youths of this generation have come to terms with the brutal reality of life in Nigeria which we saw many years back,” he said.

The IPOB leader who noted that the security agents have been lenient to criminals but brutal to their citizens, frowned at those congratulating President Muhammadu Buhari for scrapping Special Anti-Robbery Squad (SARS), saying the disbandment was more of putting old wine into new bottle.

The statement added: “These sycophants congratulating this version of ‘Buhari’ for scrapping SARS should stop doing so because nobody has scraped SARS. What they did was to give it a new name -SWAT. The Nigeria government and the Inspector General of Police simply poured the old wine into a new bottle.”

“This deceit should not be tolerated by any right thinking person. The Senate President, Speaker of House of Representatives, the ruling APC party and other individuals congratulating their newest version of ‘Buhari’ and IGP for scrapping the criminal unit of the Police are not sincere.

“They must apologise to the people for this international embarrassment. The sycophantic congratulations are a mockery of the blood of the innocent victims of SARS and other overzealous security personnel in the country.

“IPOB is calling on all the families of victims of extra judicial killings particularly those killed during the on-going ENDSARS protest to come out and show their grievances to the world, Nigeria Government and to the Police. The protest should continue until the right changes are effected.

“Nigerian youths must not relent in fighting those who abandoned all their responsibilities in dealing with armed robbers, kidnapers, ritualists and evil doers and resorted to chasing after innocent people who already encumbered with hardship.”

Posted by makarella at 7:20 AM