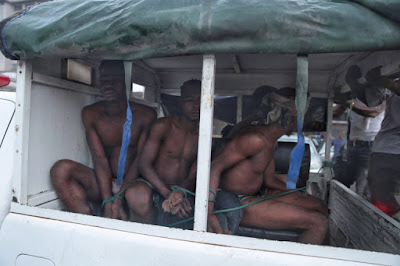 Some armed thugs were arrested by civilians at the #EndSARS protest ground in Lekki toll gate on Sunday morning.

It was gathered that the gang had been terrorising and robbing people when going home from the protest using a commercial bus.

The suspects were beaten to a pulp before been driven to a nearby police station, following a quick intervention of a private security outfit hired by the organizers of the protest.

Posted by makarella at 2:38 PM