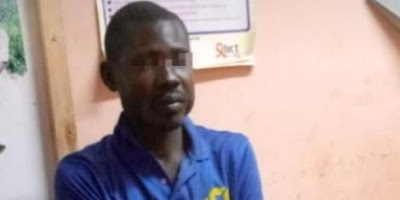 Detectives from the Directorate of Criminal Investigations (DCI) have arrested a 36-year-old man and two of his accomplices on suspicion of r.a.p.e, defilement and murder at Membley in Ruiru sub-county.

The sleuths on Monday traced the key suspect identified as Levy Abubakara who was captured on CCTV footage together with others, entering a house where a 12-year-old girl was defiled and a house girl r.a.p.e.d.

“On October 16 the suspect was seen entering the said house at Membley area in Ruiru Sub-County together with others and subsequently defiling a 12-year-old child and r.a.ping the house girl,” a police statement read in part.

It added that the suspects further tied both their legs and hands with sisal strings before murdering the house girl by stuffing her mouth with socks and strangling her using a cloth.

43-year-old Zablon Kariuki Maungu and 40-year-old David Abungana, who are suspected to be liked to the gruesome acts, were also arrested alongside the main suspect.

The three suspects are in lawful custody being processed for arraignment on Wednesday.