A notorious Nigerian mafia gansters terrorizing people in Italy have been arreted. 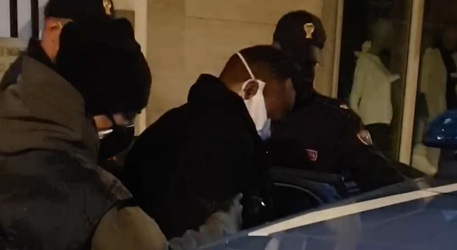 The Nigerian gagsters arrested in Italy
Police officers in Italy have apprehended a notorious Nigerian mafia unleashing terror in Turin and Ferrara areas of Italy.
According to ANSA, more than 200 police took part in the operation that took place on Wednesday.
Police made dozens of arrests against the Nigerian mafia organization called Arobaga Vikings or Norsemen Kclub International, organized into local cells called Decks and present in many Italian cities.
National leaders of the mafia, which deals mainly in prostitution and drug trafficking were arrested.
They included 50-year-old Emmanuel Okenwa aka 'Boogye', an AfroBeat DJ and the self-styled "King of Ferrara".
In all, 31 people were arrested in Ferrara.
A further 43 were taken into custody in Turin, including several women who allegedly ran prostitution rackets.
Bologna preliminary investigations judge Gianluca Petragnani Gelosi said the Vikings' criminal plan was to "violently annihilate" other Nigerian crime outfits and take over their turf.
Interior Minister Luciana Lamorgese said the police guard against criminal organizations and their illegal trafficking was high..
Centre-right opposition leader Matteo Salvini, of the rightist nationalist Euroskeptic and anti-migrant League party, congratulated the police and accused the ruling centre-left Democatic Party of "denying" the problem of the Nigerian mafia.
Posted by makarella at 10:33 AM