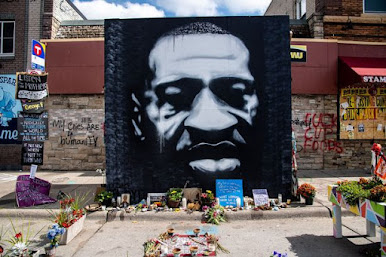 A stretch of the road where George Floyd died after being pinned down by police officers is set to be renamed in his honour.

Although the street will still be called Chicago Avenue, a section of it between blocks 37th and 39th streets will be named George Perry Floyd Jr. Place.

A sign will be installed after the City Council approved the naming on Friday morning, reports the Star Tribune.

Mr Floyd, an unarmed black man, was pinned down by Minneapolis police officers arresting him on suspicion of using a fake $20 bill at a corner shop and being "under the influence" in the driver's seat of a car.

A white police officer, Derek Chauvin, 44, put his knee on the back of Mr Floyd's neck for about eight minutes as the unarmed 46-year-old lay face down gasping for air and pleading "I can't breathe".

A bystander shouted "you're killing him".

A witness captured video of Mr Floyd begging to be freed as police pinned him to the street and witnesses screamed "get off him" before he lost consciousness.

His death has sparked peaceful protests across the globe with people calling on an end to racism and police brutality.

The stretch of road where Mr Floyd died has been barricaded for months and holds a memorial.

A group of demonstrators have occupied the area and said they will not leave until the city meets their demands.

Demands included funding for anti-racist training and a temporary property tax freeze for people within the zone.

The city had announced plans to reopen 38 th Street this summer but backed off to avoid a confrontation.

Four former police officers have been charged in connection with the death of Mr Floyd.