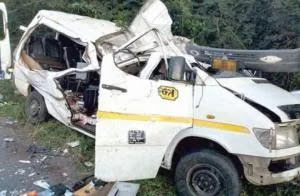 Six members of a Ghanaian based football club  "Colt F.C"  declared dead after the whole team was involved in a fatal accident while returning from their league match.

A total number of thirty-six players travelled to Afrancho for their Colts football registration exercise but were unfortunately hit with the gory accident on their return to Offinso.

Meanwhile, four of the young footballers are currently in critical condition at the Komfo Anokye Teaching Hospital with the rest receiving treatments at the St. Patrick Hospital in Offinso.

Report from the police suggests the team was returning from Afrancho to Offinso after they went to play a league.

Police say the driver of the vehicle, who was speeding, lost control of the steering wheel and veered off the road.