Falana is your lawyer, invite Falz his son for protest instead of Burna Boy, Nigerians tell Sowore 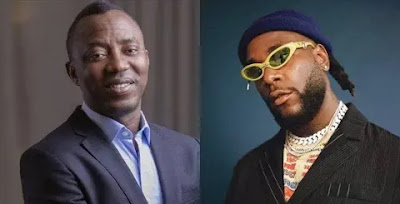 After inviting Nigerian artiste, Burna Boy to join the #RevolutionNow protest on October 1st, Nigerians have called out on Omoyele Sowore to invite Falz who is the son of his lawyer, Femi Falana instead of Burna Boy.

Sowore had on Tuesday in a Tweet said Burna Boy is usually compared to legendary musician and revolutionary, Fela Anikulapo Kuti.

According to Sowore, even the foreign media celebrate and compare Burna to Fela, but he is yet to lead any protest.

He wrote “Hello @burnaboy, everywhere I turn people describe you as a revolutionary musician, the foreign media even celebrate you compare you to Fela Kuti, but I am yet to see you lead anyone to a police station carrying a coffin for head of state! Join #Oct1stProtest #RevolutionNow”

Burna Boy who rejected the invitation said that “Everybody is a Fela fan and supporter now that he is dead. Humans are so Funny, You politicians are ALL the same (especially in Nigeria) and Frankly, I don’t trust any of you. ”

In further response, the former presidential candidate Sowore said: “I am not just one of the persons who you could describe as “Fela’s fan after he died,” I am a member of Fela’s household, ask @RealSeunKuti , as a student’s leader in the 90s I met and hung out with Abami Eda at home and the African shrine! If you want to be Fela be Fela.”

Reacting to the comments by both figures, some Nigerians urged Sowore to invite Falz who is a more Fela-figure than Burna Boy to protest with him.

@tony_divine81 wrote on Twitter “Femi Falana is your lawyer and he has a son that calls himself Falz, who is also a musician as Burna. Why are you not calling him out to join you in your national charade? Besides, why are you begging people to join you if you are on the right course”

@Amuaee “You’re not fighting for Sowore, d guy is bloody comfortable. You should fight for d millions of Nigerians who enjoyed ur music, yet have no access to basic of life. Also coming out openly to discard ds protest is giving d govt upper hand”

@mr_sobowale “Tuface later led the #votenotfight campaign. Falz created a platform where he exposed aspiring presidential aspirants for the stock they were made of and raised awareness on the need to vote right. You think filling Fela’s shoes is about smoking weed alone?”

@YorubaBoy_ “Falz is more of a Fela than Burn boy. you can’t even argue that!”

@steveabbey_ “For me, Burna Boy is doing enough with his music. Falz is another musician who is also speaking up. Sowore is coming for the wrong people. Target those who aren’t doing a thing.”

@ButtyGhetto “While y’all are dragging Burna to a protest, let’s not forget Falz is also a music activist and we haven’t seen him in a physical protest for once. Abi i lie ? Man shrugging”

@OgbeniDipo “Sowore is right though. If you want to be associated with Fela you should have the liver to lead the people and demand better from the government.”

@blaqbouiy “Falz released moral instruction close to election period to warn us though Nigerians were deaf to his message, where was Burna boy then, buh now he is coming out to say yenyenyen after claiming fela Face with tears of joy baba we dey enjoy your music for music sake nothing more or less.”

@Cap_Leviiii “When it comes to activism through music, I’ll pick Falz over Burna any day. The only person that actually addresses the salient issues undiluted and not the one that puts the youths down to feel good about himself. “Come and put your words into action” werey dey disguise. Tch”

@iSlimfit “People might say Sowore is trying to make Burna Boy an instrument to actualize his agenda, but the point for me is that if you can talk the talk, you should be able to walk the talk. No be by calling people cowards in your song. I’m sure Fela won’t be proud right now.”

@ill_nojie “Burna boy claims fella blood flows in his veins but Yet he hates politicians.

I see that he’s only carrying fela for business gains. Fela was a politician too like Sowore and even contested for president”.

Yele Sowore: Burna Boy, join us in a protest against the government.

Burna Boy: I don’t trust Nigerian politicians, they are all the same.

So you didn’t know this when you were calling us names?”

@therealdaddymo1 “Burna Boy alluded to Nigerians being cowards in a song when it comes to standing up for themselves & I guess his refusal to take a stand when called out by Sowore hit a nerve. He claims to walk in the footsteps of Fela but it’s only in songs we hear this.”

@Letter_to_Jack “The point of Sowore and Burna boy’s exchange is: African Giant who is so quick to call the youths many names is running away from a protest invitation, deflecting and shaming the person asking him to join them. You knew this yet you called the youths names??”

@_TheThirdEstate “I see a lot of people saying trash about burner because he refused to lead a protest..people that cant tell their bosses to give them a day off. Any bloodshed during the protest is just gonna be a waste for this country whether Sowore or Burna leads it”

@MrLekanAdigun “Sowore, as far as I’m concerned, is just campaigning for 2023. He can’t become Nigeria’s president even in his marijuana-induced hallucinations. If he campaigns from now till 2031, he’ll remain just the nuisance he is. Even drug addicts know that “Colorado” isn’t for small boys!”

Posted by makarella at 7:44 PM