'Adesanya is human trash, I want revenge - Paulo Costa slams the Nigerian UFC rival for his 'disgusting' celebration after winning their fight 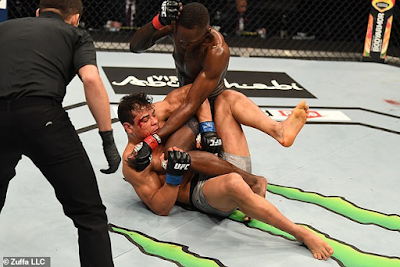 Brazilian UFC star, Paulo Costa has slammed his Nigerian rival Israel Adesanya for his 'disgusting' celebration after winning their fight.

The Nigerian middleweight undefeated champion, 31, defeated Costa with a second-round TKO win to retain his UFC middleweight title in Abu Dhabi over the weekend.

When the referee moving was in to end the bout, Adesanya mocked his opponent by pretending to have sex with Costa before moving away to celebrate the victory.

Posted by makarella at 6:57 PM