Oh No! See The 10-year-old Boy Locked Inside Animal Pen For 2 Years By His Wicked Stepmother (Video)

A little boy locked up in an animal pen for two years by her stepmother has been rescued. 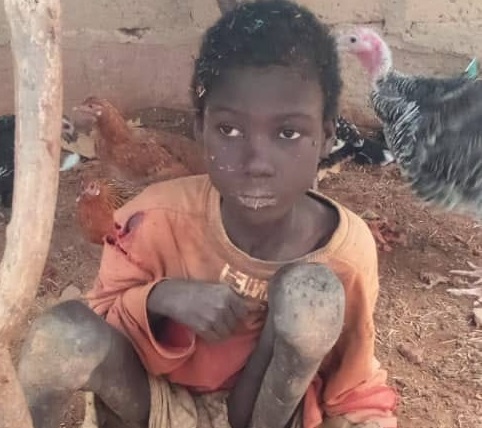 Jibril Aliyu
A woman has been apprehended after she allegedly tied up a 10-year-old orphan, Jibril Aliyu, for two years without enough food in Kebbi State.
The boy was allegedly subjected to inhuman treatment by the woman said to be his step-mother, two years after the death of his mother.
The video of the incident showing the teenager who is believed to be around 10 years of age looking emaciated and unable stand erect as a result of suspected long impoverishment by his alleged persecutor has surfaced online.
The culprit had been arrested while the boy had been admitted to the Sir Yahaya Memorial Hospital in Birnin Kebbi, the state capital.
Another amateur video, which was allegedly taken at a police station in the state, also showed the suspect speaking to policemen, denying having tied the teenager up without food.
According to a Facebook user, Maryam Shetty, who also posted the video on her timeline, the boy has lost his mother a few years back, adding the his alleged guardian subjected him to eating from remnants of food and animals’ dung.
Ms Shetty condemned the woman for allegedly showing no remorse, describing her as evil.
She said: “Videos of an evil remorseless woman from Kebbi State that tied up an orphan who lost his mum for 2 whole years like a goat! He is impoverished and only ate from remnants of food and animal’s dung. Such cruelty….”
When contacted, the spokesman for Kebbi Police Command, confirmed the arrest of the suspect, saying the woman was in police custody.
According to him, when investigations are concluded, the suspect would be arraigned before in court.
Watch video below:
Posted by makarella at 10:28 PM