A bride wearing her wedding gown has been seen in Lagos shouting as she ran along the street. 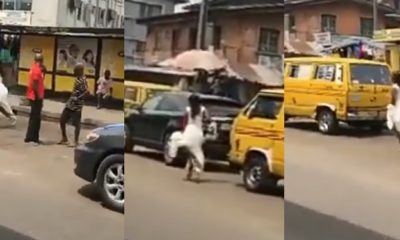 Bride screaming and running in Lagos
A yet-to-be identified bride has been spotted running helplessly on the road while wearing her wedding gown.
In the video which was shared on social media, the bride was spotted running hastily to an unknown destination and screaming ‘I go talk’, as passers-by watched in amazement.

The reason behind the bride’s action remains a mystery as the person who recorded the incident also had no idea why she was running away from her wedding venue.
However, Nigerians have expressed their heartfelt feelings for the bride and whatever she heard that made her run away from her own wedding.
Watch the video below;
Posted by makarella at 3:06 PM