A former aide to President Muhammadu Buhari by name Wada Maida has died in after returning from work yesterday. 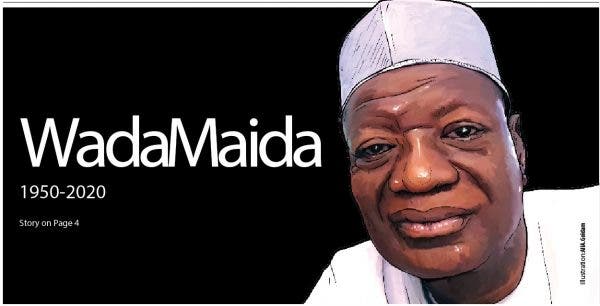 Wada Maida
President Muhammadu Buhari's former Chief Press Secretary, Wada Maida is dead.
He was Buhari's Press Secretary when he ruled Nigeria as military Head of State in 1984.
Until his death, Maida was a member of the Executive Board of International Press Institute (IPI) and the Chairman of Board of Directors of the News Agency of Nigeria (NAN).
Maida, who was in his office yesterday, did not show any sign of sickness was said to have slumped last night.
Born on March 5, 1950, in Katsina State, Maida was the Chairman of the Board of Directors of People’s Media, and a former Editor-in-Chief and Managing Director of NAN.
He studied at Government College, Katsina, 1964-1968; Nigerian Institute of Journalism (NIJ), 1971; Indiana Institute of Mass Communication, 1972-1975; and Aberdeen College of Commerce, UK, 1975-1977.
He was appointed information officer, Kaduna State, 1971-1978; zonal editor, 1978-1981; Foreign Correspondent, NAN, in-charge of Western Europe, London, 1981-1983; and Chief Press Secretary to Buhari when he was the Head of State from 1984-1985.
Maida was Editor-in-Chief, NAN, 1985-1994, and Managing Director in 1994.
He was a member of several organisations, including the Nigerian Guild of Editors (NGE), Vision 2010, Foreign Press Association, London, and Amnesty International, and co-founder of Daily Trust, among others.
Buhari had in a congratulatory message to Maida when he clocked 70 years in March this year, noted with delight his quintessential humility, sincerity and forthrightness for an upwardly mobile career.
Posted by makarella at 12:04 PM