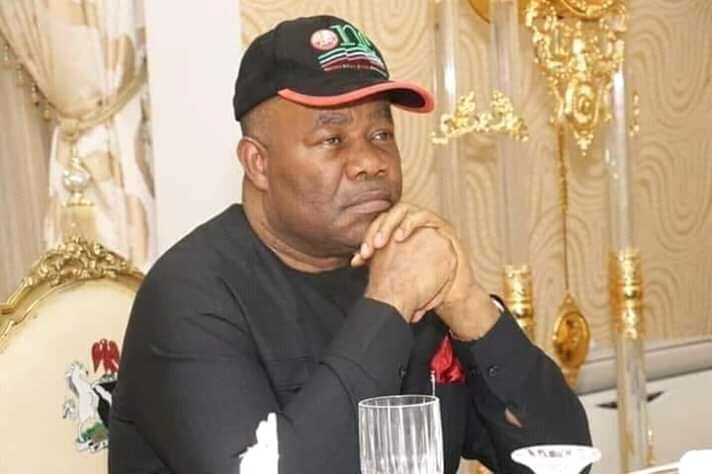 The Minister of Niger Delta Affairs, Senator Godswill Akpabio, has reportedly linked two former governors of Delta State, James Ibori and Emmanuel Uduaghan, to some of the projects that have been executed by the Niger Delta Development Commission, Punch reports.

Akpabio in a letter sent to the speaker of the House of Representatives, Femi Gbajabiamila, listed the former governors as some of the beneficiaries of the projects by the commission. Also on the list as a beneficiary of projects were the Senate Chief Whip, Senator Orji Uzor Kalu, and Senator Ifeanyi Ararume, among others.

The letter which is titled ‘Some Niger Delta Development Commission Contracts Allegedly Given to Some Members of the National Assembly (Senate and House of Representatives).’, was also copied to the office of the Attorney General of the Federation/Minister of Justice and was addressed to the Clerk to the House, Mr. Patrick Giwa, with Reference Number MNDA/HM/04/IV/158.

According to the letter, one of the projects linked to the convicted former governor of Delta state, James Ibori, was the emergency repairs of Onoghove community road from Ajanesan to Western Delta University at a cost of N485.7m.

The letter also stated that Uduaghan was linked to the emergency repairs of Close B, Alhaji Estate & Environs, Rumuodomaya, Port Harcourt at a cost of N429m.

Five projects were linked to Senator Kalu who was simply identified in the document as OUK-Kalu (the project source). The emergency repairs on road projects linked to Kalu are in Abia State and the costs ranged from N517m to N560m. The details are Emergency repairs of Ezere-Acha-Ndiokoukwu Road (N517.9m) and repairs of Amaubiri-Eluama-Uru Ring Road, Lokpaukwu, Umuchieze (N560m). Some other projects linked to Kalu include Ndi Oji Abam-Atan  Road (N523.7m), Okafia-Ozuitem-Bende road (508m),  and the Ozu-Amuru-Abam Road at the cost of  N523.4m.

The cost of the 12 projects linked to Senator Ifeanyi Ararume, located in Imo and Rivers states, were not indicated in the documents.

The NDDC document, however, listed some the projects to include, emergency repairs of Umuelemai-Aba branch road, Anara-Okwelle-Umuna Road, Okpara-Road junction-Ogili Community all in Imo State.

On Monday, July 20, Akpabio while testifying at the House of Representatives panel investigating allegations of financial recklessness at the NDDC, alleged that most of the contracts awarded in the Commission were to members of the National Assembly.

On Tuesday, July 21, the Speaker of the House of Representatives, Femi Gbajabiamila, gave the Minister 48 hours to release the names of the lawmakers in question or face punitive measures.

After the two-day ultimatum had expired, the Speaker of the House of Representatives, Femi Gbajabiamila, directed the clerk of the House to institute a lawsuit against Akpabio after he failed to release the names of the National Assemblies members that have been awarded contracts by NDDC. Akpabio in a letter that was later read on the floor of the House of Representatives by the Speaker, denied saying 60% of the contracts were awarded to lawmakers. He however penned down some names of some Nigerians who have been awarded contracts by the commission.

The House of Representatives however insists Akpabio must publish the names and not send it as a personal letter to the Speaker of the House.
Posted by makarella at 1:10 PM