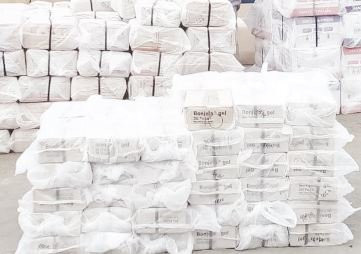 A  40-ft container loaded with Tramadol and other banned medicines has been intercepted by the National Drug Law Enforcement Agency (NDLEA) at Brawal Terminal in Lagos.

NDLEA Chairman, Col. Muhammad Abdallah (Retd) confirmed the interception and further revealed that the drug which is one of the banned medicines in the country was taken to a bonded terminal in Apapa.

A joint examination revealed 255 cartons of different types of Tramadol and other banned medicines.

“Police detectives in Apapa Area Command of Lagos State intercepted a 40-foot container laden with drugs suspected to be Tramadol and codeine on August 6.

“The container was intercepted on water and taken to a bonded terminal in Apapa.

“This is of global interest. Drug trafficking is one of the vices fueling insecurity across the country.

“Abdallah observes that this investigation is a major breakthrough for the agency revealing the new route for movement of Tramadol into Nigeria which is from Pakistan via Europe (Hamburg) to Nigeria."

Posted by makarella at 3:15 PM