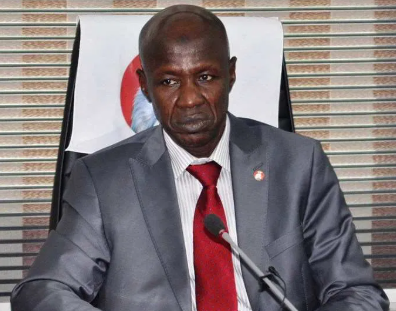 Suspended acting chairman of the Economic and Financial Crimes Commission EFCC, Ibrahim Magu, has written a letter to the Inspector-General of Police, Mohammed Adamu, asking for bail on self recognizance.

He requested for bail through a letter sent on his behalf by one of his lawyers, Oluwatosin Ojaomo, to the police chief on Friday, July 10.

Magu has been detained at the Force Criminal Investigation Department (FCID) since Monday, July 6 when he first appeared before the presidential panel probing him for the allegations of misconduct leveled against him by the Minister of Justice and Attorney-General of the Federation, Abubakar Malami.

In June this year, Malami wrote a letter to the President accusing Malami of corruption, diversion of recovered funds among other offenses.
Posted by makarella at 4:43 PM