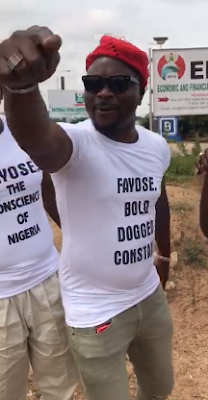 In July 2019, I got a call from EFCC  that I should report to EFCC Abuja. When I got there,they said it is about my tenant, something that happened in 2008. A tenant & Landlord case were I was given a clean bill, and I had done nothing wrong, but "Oga said make we investigate it again", that they are revoking my clean bill & clean report.


I said why will they do that, and that it is very wrong and it's against the law after 11 years! How can you want to rewrite it? Even the staff that investigated it have been transferred or moved on! "They said no, that Oga said we should charge you to court". We have told him that this is purely a civil case of a landlord and tenant matter,  but Oga insisted that we should charge you to court!

I don't know what you have done, or why he want us to charge you, but this is not a criminal matter,it is civil and you have not done anything wrong, that was why we cleared you in 2008, and that they don't know why Oga believes  there is a new evidence.

Then I said ok! can u speak with the secretary or if I can call the secretary to come to EFCC.They gave me his number that he is a yoruba  man,maybe he can beg Oga for you but Oga has made up his mind , so today we won't let you go back home. We will detain you. I was shocked!

I started shaking and wondering what I have done! So, they detained me, & took me to court.

Two days after, when I was going to the cell,they said Oga said my brother has  an autopedic bed in the cell , and that they should give me to sleep. My  brother Ayo Fayose bought a bed few months ago in the cell he used to sleep on, I should tell them to give me the bed.

I smiled! I said if it's their will, it will happen,if it's not their will,it will not happen. I took my phone and I sent a text to the secretary to EFCC the current secretary and I explained that what they are doing here is not right and it is against the will of God to make people suffer for what you know they did not do, and you the secretary, you are a Yoruba man, think about it, and get back to Magu  not to behave the way he is  behaving .

I was taken to the cell. I was in the cell for 48 hours, I refused to eat for 48 hours only water.

Each night in the cell, at 12 midnight,I take off my clothes  & leave only my boxer on, and then call the cell people in EFCC cell in Abuja and say let us pray....

I led the prayers for 2 nights in the cell without my clothes on, just with my boxer.

And I said to my God, the God of Isaac! That if truly a man can punish another man for what he didn't do, just for a position or to get back at his brother, just because he wants to use the position on me and he wants to maintain his position, and to get back at my brother. He wants to prove to the world that the Fayoses' are bad! He wanted to create a dirty story of me.

Each night, my prayers were before the end of one year, God of Isaac must send a reproach to the people that plan this! People that are ready to dent my image, God should tear their image. Because I believe in what the Bible says that "He who tears a garment of Honor, shall wear a Mask of Disgrace".

Little did they know that the God of Isaac was already in the court, and the Judge saw all their mischievous act and the Judge said, "You obtained this order since January 10th, why are you bringing this young man on July 7th when you know the court is going on vacation". Is this not Evil? is this not funny? I will give him Bail. She gave me bail with the bearest minimal condition. Three people were fighting to take my bail immediately because they saw the hand of God. I walked away from the court.

They brought their media who were taking all my pictures. It was well planned!  "NAME KILLING MISSION" . The media was taken before I left court ! They immediately had put it on their website. People were sharing the false of Evil mind.

360 days after, "THE HUNTER, BECOMES THE HUNTED".
Magu is in the cell, he has been detained.The killer of Grace is now dying in spirit. He is now calling Allah.

I will encourage all of us to use this story as a watchdog and whatever we sow, so we shall reap. And we have to be careful with the people we offend, the people we set up, as we grow in Life because the Bible says" TOUCH NOT MY ANOINTED AND DO MY PROPHET NO HARM".

Be careful the prophet you are touching today.

How are you using your position? Is it of God or of Man? Because nobody battles with the Lord! I pray you repent from this Dear Mr Magu and believe in your head that Fayose Family are of God and not of  Man. Remember Fayose case came up yesterday, while you are detained but you couldn't provide any evidence. Infact,  you said COVID 19 is killing your Co- Travellers family. If I were you, I will confess my Sins so God can quickly have mercy on me.
Nigerians! not everything that is Fire that can burn you!