Inside The Drug World Of Abuja Agberos

They make all the noise involved in canvassing for passengers, putting in so such productive efforts that result in loading the vehicles and smoothen the operations of the drivers and confuse passengers at the parks and bus stops. 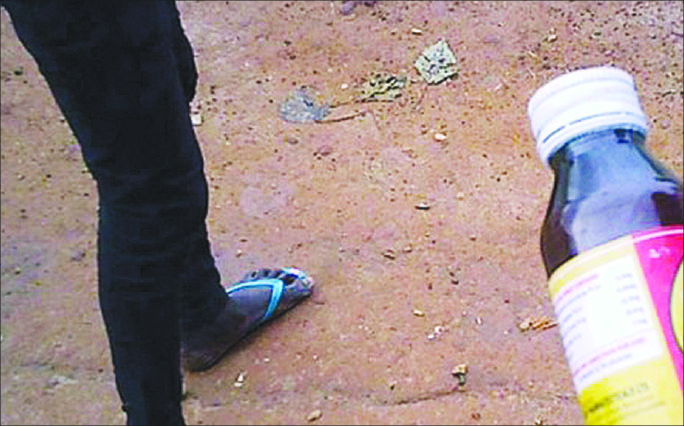 File photo
It is pejoratively called “Agbero”, “Ocho” passenger and “Yan Tasha”, in Yoruba, Igbo and Hausa languages respectively. For some, their presence is the best thing to happen at the motor parks, bus stops and other places they operate due to the help they provide.


They make all the noise involved in canvassing for passengers, putting in so such productive efforts that result in loading the vehicles and smoothen the operations of the drivers and confuse passengers at the parks and bus stops. But, for others, that may be where their relevance ends.

In the Federal Capital Territory (FCT), Abuja, they are visible. From Area 1, Berger Roundabouts, Wuse Market, Airport Road, Kubwa Expressroad to AYA and suburbs like Kuje, Nyanya, Bwari and Gwagwalada, they operate unchallenged and unrestrained.

Their membership spans across the eastern, western, northern and southern parts of the country. But they are united by the multiple purposes of providing assistance to commuters and unleashing anguish and pains on the residents of Abuja.

At most parts of the FCT and environs, the men can best be described as terrorists in their modus operandi. To many motorists, their nuisance factor has become legendary to the point of menace to the territory. Their actions and inactions have even been responsible for several auto accidents along the major roads.

They are equally behind the perpetration of various crimes and criminalities day and nights especially in dispossessing unsuspecting passengers of their belongings and sometimes inflicting injury on both passengers and car owners.

At some areas of the FCT, their enclaves are haven for consumption of all manners of hard and illicit drugs and nest for recruiting and breeding boys that have become easy hands for all kinds of nefarious activities.

As much as they provide all forms of help and support, especially in loading vehicles, investigations reveal that the members have also planned and executed several robbery operations from the bus stops and parks. While many joined them basically because of hard times, others joined out of frustration.

Curiously, however, security reports reveal that most of the areas they operate in the FCT, especially the Airport Road, have become recruitment hobs for miscreants and several almajirai, mostly from the northern part of the country.

Although it is not job for the feeble hearted, considering the stress and rigours of shouting, fighting and abuses, yet on daily basis, new faces of relatively uneducated young men swell up the population of these passenger canvassers at the bus stops, along the roads and motor parks.

It may be shocking to think that they are sheep without shepherds. Behind the haggard, heartless and unnecessarily aggressive touts molesting, robbing and loading vehicles, are their leaders, at the kiosks they use as offices. Those are where financial dealings are transacted periodically, defaulters tried, sanctions melted and redeemed and other disputes resolved.

There is also hierarchy in the headship of the union which occupation comes with dexterity, doggedness and years of services. At some areas, it is usually inheritance by survival of the fittest. The leaders are really mighty men of valour that serve as law unto themselves.

Disguising as a car owner seeking registration and to obtain operational license, Daily Sun correspondent was usually directed to their heads at various points, in observance to the rigid constituted authority in the union, informing that registration ranging from certain financial commitments to issuance of permit papers.

For a septuagenarian along the Airport Road, fondly called Papa, it has been 16 years of battle for survival, years of fixation, close shaves with death and interaction with seen and unseen forces along the road, after joining the union due to the demolition of his house those years Nasir El-Rufai rolled out bulldozers.

Papa announced that though he is not in a hurry to quit the road despite the plethora of attendant risks associated with it, he won’t allow his child to take after him: “I joined them when I lost my job and El-Rufai demolished my building several years ago.

“The former union chairman had on recruiting me, warned that the job is full of risk and not what someone of my age can do. But, I told him that I did not have a choice. I was homeless, helpless and unable to provide food for my family.

“I took up the challenge then and today, I look back with mixed feelings, despite climbing the leadership lather. If I have another option, I would have left this job because the risk involved is just too much. I feel it is too late to quit because it has become the source of survival for my family. Apart from providing us food, the job also pays our bills.”

You are in for shock thinking that becoming a beneficiary of “Agbero” patronage as a car owner is just a stroll into park. Financial commitment, running into thousands of naira, is involved. According to Papa, it comes with a big price tag for both the Abuja regular taxi and the usual pick and drop car owners to operate without molestation:

“You will pay N7000 for both unit and branch, which is N3000 and N4000. Once you pay for those ones, you are free to load without anybody harassing you. Every member of the NURTE has an identity card. We are not operating illegally because our union, the NURTE, was formed in 1934 under the leadership of Chief Obafemi Awolowo in Lagos while the NURTW was formed in 1978 as a breakaway from NURTE.

“As the work entails, I won’t advice any young boy to join us. I didn’t believe I could do it when I joined, but I had to continue enduring because I didn’t have option. However, if anyone insists on joining us, we usually engage them among those ones arresting vehicles along the road where we have vacant.

“That is the riskiest part of this job. You can see the way they cross the road just to arrest defaulting vehicles. We have recorded some cases of vehicles hitting some of them while running across to arrest cars.”

Explaining his close shave with death in line with the risk involved in touting, the septuagenarian recalled two horrible incidences involving the law enforcement personnel:

“Just recently, those boys had swooped on a motorist who shouted thief, thief, thief and unfortunately for them, a Special Anti-Robbery Squad (SARS) patrol vehicle arrived the scene. They picked some of those boys and their boss, who is called Too Much Money, but he told them that I was their chairman.

“The SARS operatives ordered me into their vehicle but as God may have it, our vice chairman just arrived the scene. I told them that he is the senior.

“They took all of them to the office and while the vice chairman spent three weeks, they kept Too Much Money, for more than three months. He saw hell.”

He recounted another close shave with death: “Sometimes last year, the boys had swooped on a parked vehicle, they didn’t know he is a military man. He pulled his gun and shut them on their legs and zoomed off. Nothing has been heard about those boys till today.”

But it will be hasty to conclude that the law enforcement agents are constantly a thorn on their flesh, as Papa simply quipped on inquiry about police harassment: “Leave police for us. Police and union are one and the same. We don’t have problem with them.”
Among the touts are unrepentant robbers behind dispossessing passengers of their belongings like handsets and bags. They are in all the areas the union operate unleashing terror on hapless commuters, especially at night. Although, Papa angrily condemned their operations, he, however, said nothing about any deliberate effort by the union to rid the body of such bad eggs. “It is not good, we have been talking to them to change, but we can’t force them to stop,” he simply quipped.

Like the bus stops in Lugbe, the scenario is exactly the same at other areas they operate or even worse. Chatting with our correspondent, one of them at AYA argued that it would very difficult to checkmate the robbery aspect of their work:

“Oga, there is no money in this hustle. We are just managing. I have spent over seven years on this job and I can tell you that we are just living from hand to mouth. See, I have been hustling since morning and it will surprise you that I don’t have up to N1000 in my pocket. I have family to feed, I have parents back home to send money to but where will I get the money?

“Oga, the truth is that it will take the grace of God not to steal careless passengers and pray that you are not caught. Several times, people mob, maim and attempt to kill some of the robbers operating among us here. I have never been involved in stealing anybody’s belonging.

“But I tell you that I have repeatedly been tempted to join them especially hearing them narrate how much they usually make snatching some bags mostly ladies. I don’t pray for my child to do this work and I can’t even proudly tell them what I do for a living here.”

It is also a mix grill of sadness and joy for the vehicle owners that have had one rough encounter with “Agbero” as each has one nasty story or the other to tell. Narrating his encounter with them, a civil servant resident in Kuje, who identified himself as Kazim, said he had to bribe to secure his freedom, adding that he never prayed for his enemy to encounter them again after dealing with him:

“I do not attempt to carry passengers during the morning hours and the day because they are always very aggressive. I do not want to have the same experience I had before. They just swooped on me pretending to be passengers, removed my key from ignition violently. I had to beg them, but they insisted on taking me to their office. On our way, they collected N2000 I offered them as bribe.”

Kazim’s experience was a child’s play compared with that of Jude, an auto mechanic at Apo, residing at Nyanya. Jude told our correspondent that the touts at Area 1, Area 3 and Berger Roundabout were the most dreaded of all, judging by his encounter with them:

“I have fallen victim twice at Area 1 and Berger, which forced me to pay N7000 for their operational tickets. At Area 1, they usually run across the road just to catch a vehicle without minding whether a speeding car will hit them down.”

“But, the ones at Berger have repackaged their operations. Some of them usually dress responsibly, even on suit and briefcase, just to arrest defaulting vehicles. They will wave you down and once you stop, you are in for it. They don’t take ‘abeg’ at those two areas.”