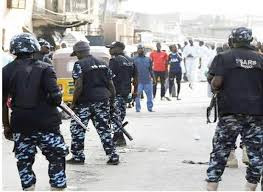 A statement released by Bala Elkana, spokesperson of the state police command, says two weeks ago, the Commissioner for Police in the state, CP Hakeem Odumosu psc, ordered the deployment of Special forces from the Command’s tactical units to Ikorodu and environs to tackle the menace of cultism and gang violence. Rival cult groups, especially in the Ikorodu area, have in the last few weeks, engaged themselves in a supremacy battle with resultant death from both sides.

Bala said a successful operation by the team has led to the arrest of 185 notorious cultists and the recovery of 8 locally made pistols and other dangerous weapons from them.

He said the suspects arrested confessed to belonging to Eiye, Aiye, KK, Buccaneers, Vikings confraternities, among other cult groups. According to his statement. one Gbadamosi Mohammed, 30, suspected to be among the cultists who killed one Madariola Sunday at Ibeshe on May 21, was among the suspects arrested. Also arrested are Onibudo Afeex ‘m', Habeeb Isa ‘m', Felix Igwoke ‘m', Taiwo Iyanu ‘m' at Femi Taiwo Street, Ikorodu. Bala said they were arrested in an uncompleted building holding cult meeting.

He said all the suspects will be charged to Court soon.
Posted by makarella at 4:45 PM