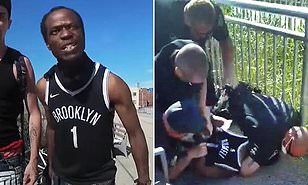 The New York Police Department has suspended a police officer for slamming a black man to the ground on Sunday and putting him in a chokehold - eight days after New York Governor Andrew Cuomo banned the use of chokeholds among police officers following the killing of black American George Floyd by a White police man, Derek Chauvin.

The man who said his name was Ricky Bellevue, was standing with two white men on the boardwalk at Rockaway Beach, Queens, New York at 8.45am on Sunday when the incident happened.

The two white men he stood beside were filming and jeering at the officers then immediately Bellevue got close to the officers, the police officer body camera footage shows him being flung to the floor.
His left hand could be seen holding a white plastic bag in the unclear footage, but a policeman said he grabbed something, perhaps with his right hand while approaching the officers.
Bellevue then tells a cop: 'You scared, you scared?'
As he approaches the officer, one of the white men turns to Bellevue and says: 'Yo, n***** what the f***?'
One of the white men with Bellevue tries to hold Bellevue back, but the officer lunges forward and grabs him, taking him down. A scuffle then ensues and scene photos show Bellevue being held in a chokehold.

A bystander watching Bellevue being face stamped to the ground by four police officers, yelled: 'Yo, he's choking 'em, let 'em go!'
Bellevue is overheard telling the officers he is bipolar and asthmatic.
'This is what you do to a black man on Father's Day?' he says after he is led to an ambulance.
'This is what you do in America? I'm born in America.
'You're not here to help us. You're here to kill us. I always get beat up by the police.'
Standing by an EMT vehicle, he complains about his neck.
'Sir, there is no pressure on your neck,' one officer is overheard saying.
Bellevue keeps on repeating that he is asthmatic.
A person says: 'Sir, I am EMS, do you mind if I take a look at your lungs?'
He replies: 'Get the f*** away from me. You put me on my head. You smacked me, n*****.'
'I'm going to sue y'all,' he says. 'I want all your badges

Dermot Shea, commissioner of NYPD, reacting to the incident, said the officer involved has been suspended.
'Accountability in policing is essential,' he said. 'After a swift investigation by the Internal Affairs Bureau, a police officer involved in a disturbing apparent chokehold incident in Queens has been suspended without pay. While a full investigation is still underway, there is no question in my mind that this immediate action is necessary.
'We are committed to transparency as this process continues.'
Watch the video below..

Minh Ngo@minhtngo
This is NYPD officer David Afanador (Badge #31730) using an illegal chokehold on a black man today while making an arrest in Far Rockaway.

The cops only stopped once they realized they were being filmed.

670 people are talking about this

NYPD NEWS ✔@NYPDnews
· 10h
There was an incident in the 100th precinct in Queens and the NYPD’s Internal Affair Bureau is actively investigating the force used.

NYPD NEWS ✔@NYPDnews
Here is the body worn camera associated with this incident.

This matter is taken extremely seriously and updates will be shared with the public as the investigation unfolds.https://www.youtube.com/watch?v=bkh2CPZPSGk …

260 people are talking about this
Posted by makarella at 9:37 AM