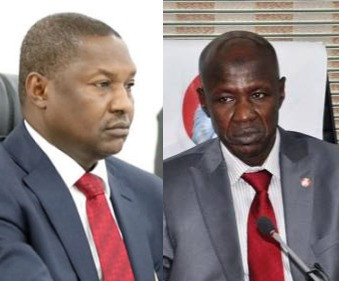 Abubakar Malami, Nigeria's Attorney-General of the Federation (AGF) and Minister of Justice, has reportedly written to President Buhari, recommending the termination of the appointment of the Acting Chairman of the Economic and Financial Crimes Commission (EFCC), Ibrahim Magu.

Thisday reports that Malami, in his letter to the president, based his recommendation on several grounds “raging from diversion of recovered loot to insubordination and misconduct” by Magu. Multiple sources told THISDAY that Malami included a shortlist of three candidates for consideration to replace Magu.

The report states that Magu is fighting back and his supporters within the Presidency insist that removing Magu at this time when he has given muscle to Buhari’s anti-corruption fight would be a mistake.”

“It is painful that the EFCC boss is facing certain powerful forces who have decided to remove him in spite of his remarkable achievements,” sources stated.

The sources said given the weight of Malami’s allegations against Magu, the president may be inclined “to set up a probe panel that will look into the veracity of the allegations and make necessary recommendations.”

One of the sources told selected journalists

I can authoritatively tell you that though Magu has survived previous plots to remove him, the AGF’s legal opinion remains the deadliest plot to get Magu out of the EFCC as AGF’s letter to the president contained 22 weighty allegations that require Buhari’s decision on whether or not to send Magu’s name to the Senate for confirmation or replace him….. This is because the office of the AGF is the supervising ministry of the EFCC and so his legal opinion cannot be treated with levity.
For example, Malami alleged accounting gaps or discrepancies of figures concerning the recovered assets, claiming that Magu was not transparent enough in the management of recovered assets…”

Reacting to the allegation, a supporter of the acting EFCC boss said

''It will interest you to note that Malami accused the EFCC boss of disclosing a total naira recovery of N504 billion but lodged N543 billion in the Recovery Account with the Central Bank of Nigeria (CBN). Incidentally, this exceeded the disclosed figures by N39 billion.”

Malami claimed that most of the recovered assets by the EFCC were allegedly sold by Magu without the knowledge of anyone.

“But it is unfortunate that this claim is at variance with the public auction of assets by the EFCC,“ the source told ThisDay.

Another supporter of the EFCC boss said

'Malami also accused Magu of blatant display of arrogance and insubordination to him as supervising minister of the EFCC.” another source said

It will be recalled that many efforts have been made in the past to make the president to drop Magu, since his appointment as EFCC acting chairman on November 9, 2015.
Posted by makarella at 11:10 AM