The government of Ekiti state has continued its campaign to rid the state of rapists by naming and shaming them. 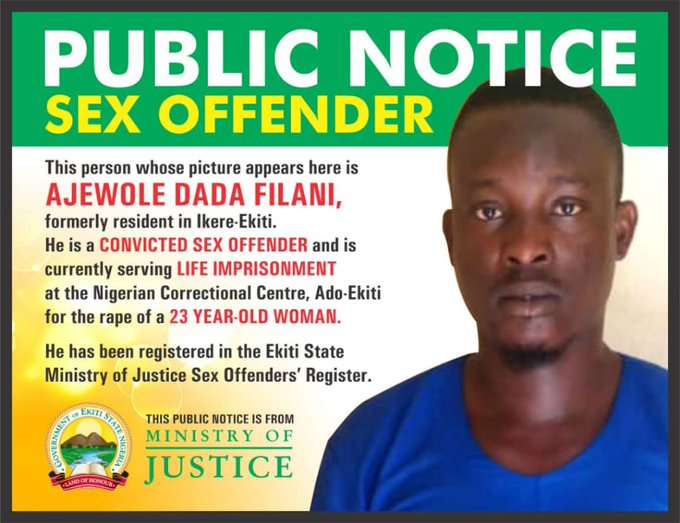 Ajewole Dad Filani
A convicted rapist, Ajewole Filani, has been named and shamed by the Ekiti State Government, on Friday.
His name and photograph was posted in public places as a way of deterring people from engaging in rape.
Filani, a young man formerly living in Ikere Ekiti, is at present serving life imprisonment at the Nigerian Correctional Centre, Ado Ekiti, for raping a 23-year-old lady.
Under the name and shame initiative, the names and photographs of convicted rapists are pasted on billboards in prominent public spaces in their communities and local government council headquarters as well uploaded on the website of the state Ministry of Justice and other government platforms in addition to being recorded in the sex offenders’ register.
Filani joins four other convicted rapists, who had been similarly treated by the state Ministry of Justice.
The state government said it was publicly shaming convicted rapists in the state through the  initiative in order to serve as a deterrent to would-be sex offenders and as well task families on the upbringing of their members.
The state Attorney-General and Commissioner for Justice, Mr Olawale Fapohunda, said the step was in furtherance of the zero tolerance of the Kayode Fayemi administration for violence against women and children.
Posted by makarella at 9:41 AM