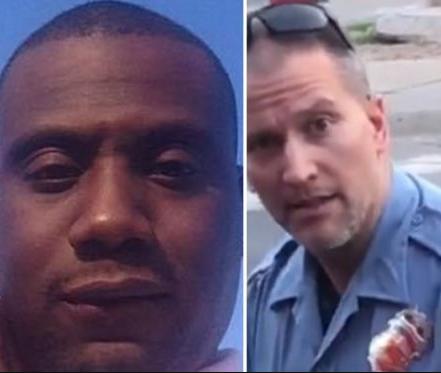 A Minneapolis man, who identified Derek Chauvin from the video where he was kneeling on the neck of George Floyd till he died, has told of how the same officer almost killed him in 2008.

According to Daily Beast, Ira Latrell Toles,33, said Derek Chauvin stormed into his home on May 24, 2008, and assaulted him in the bathroom before shooting him in the stomach.

After watching the video on George Floyd's tragic death on Tuesday evening, Toles texted his sister saying Chauvin might have been the cop who shot him.

His sister watched the video fo Derek Chauvin kneeling on George Floyd's neck for 9 minutes and she confirmed that he was indeed the one who shot him in 2008.

Toles, who still experiences stomach pain to this day, says George Floyd would have been alive today if Chauvin was punished for shooting him in 2008.

"If he was reprimanded when he shot me, George Floyd would still be alive," Toles said.

Recall that LIB reported that the two officers identified from the video of George's death have harmed civilians before and got away with it (read here).

Toles said his own experience with officer Derek Chauvin occurred when the mother of his child called the police and several officers arrived at the home without announcing themselves.

"When I saw that he breached the front door, I ran in the bathroom. Then [Chauvin] starts kicking in that door. I was in the bathroom with a cigarette and no lighter."

He said he started to hit Chauvin in self-defense and was shot because he allegedly tried to grab the officer’s gun.

After receiving treatment at the Hennepin County Medical Center, Toles was transported to court where he was charged with two counts of felonious obstruction of legal process or arrest and a misdemeanor for domestic assault.

"To turn a misdemeanor disorderly situation into a felony situation that could have resulted in me dying? He tried to kill me in that bathroom," Toles added.

Chauvin and the other officers were placed on paid leave pending an investigation.

"I knew he would do something again, I wish we had smartphones back then," Toles said.
Posted by makarella at 2:48 PM