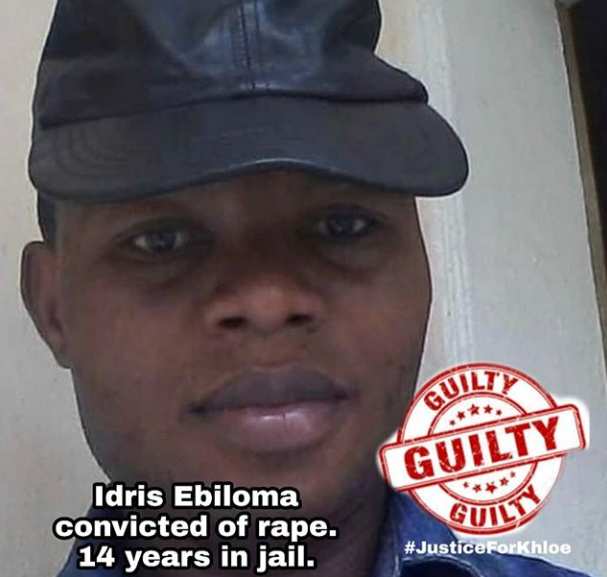 The man who raped a 4-year-old girl in Abuja, prompting the hashtag #JusticeForKhloe, was sentenced to 14 years in prison today May 13th.

The story of Khloe and how she was raped through the vagina and anus was made to go viral when actress Rita Dominic took to Instagram to write about it.

She narrated how Idris Ebiloma, who was 28 at the time, raped little Khloe, who was 4 years and 3 months old. The incident happened on the 31st of August 2016.

According to Ms Dominic's report shared on Instagram in July 2019, Idris was working as a cook for the victim's parents in their home in Asokoro, Abuja, when he assaulted the child.

She added that when the victim's mother reported the incident to the police, she was "compelled to drop charges against the boy." However, the mother refused and continued to pursue the case.

Rita said the mother faced lots of "challenges" while pursuing the case, "from the police prosecutor, Mr John I. who refused to tender all the evidences in court." She added that the victim's mother has been "frustrated by how the Nigeria Police FCT Command has handled the matter."

Rita's narration angered a lot of people and they called for justice using their platforms.

Richard Mofe-Damijo reacted by writing an open letter to the Police Command to demand justice.

Tonto Dikeh reacted by leading a protest of Abuja residents to the Apo High Court where the case was brought for trial.

Well, justice has finally been served many months after.

Activist/rapper Ruggedman revealed that Idris was sentenced to 14 years in jail today.

He wrote: "Remember the man who raped 4 year old Klhoe? His name is Idris Ebiloma. He was today sentenced to 14 years in prison. Finally, #JusticeForKhloe." 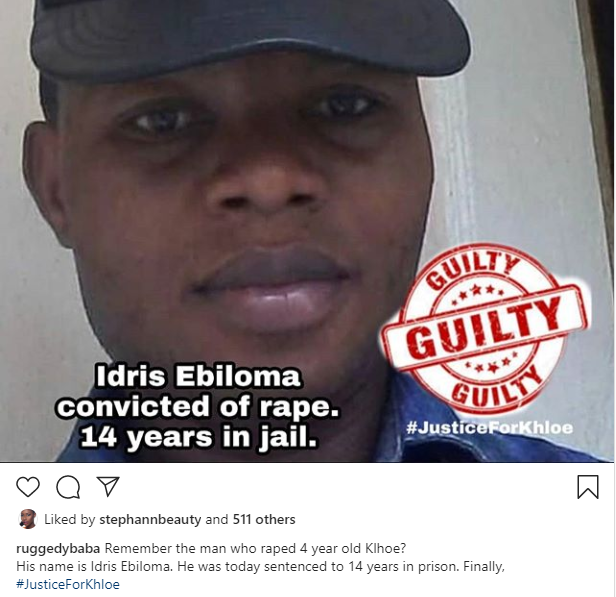 Posted by makarella at 9:26 PM