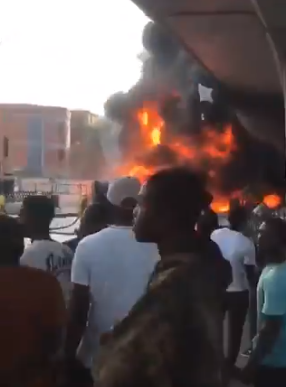 There's a massive fire outbreak at Oando filling station, Obalende at the moment.

According to eye witnesses reporting on social media, a tanker fully loaded with petroleum product fell in front of the Oando filling station and immediately caught fire.


But others are saying the tanker was already offloading its content at the filling station when a car rammed into it leading to a massive fire outbreak.

Which ever way, there's a massive fire outbreak and fire fighters are already at the scene. Three videos below... 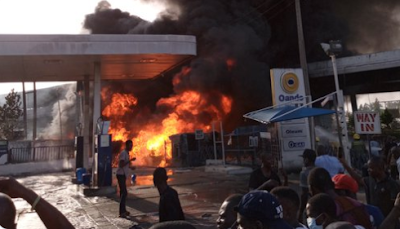 According to eyewitnesses, the fire was caused by a tanker carrying petroleum product. The tanker fell off and immediately ignited.https://www.chronicle.ng/2020/05/oando-fuel-station-on-fire-in-obalende-lagos/ …

An Oando fuel station on Obalende, Lagos Island of Lagos state is on fire.
chronicle.ng
6:19 PM - May 1, 2020
Twitter Ads info and privacy

Cause: A tanker was offloading in the filling station when an incoming car rammed into it
29
6:12 PM - May 1, 2020
Twitter Ads info and privacy

See Everything FCM's other Tweets
Posted by makarella at 7:57 PM